You Talking To Me? — How Scorsese Directed the Iconic Taxi Driver Scene

admin
You talking to me? How Martin Scorsese the most iconic Taxi Driver scene.

You talking to me? It’s a question that immediately brings to mind the Taxi Driver scene in which we witness deranged vigilante Travis Bickle’s tipping point. The “You talking to me?” quote quickly became ripe for parody, a popular go-to for a wise-cracking impression. But the context of the scene is actually quite dark and disturbing — a mood director Martin Scorsese navigates expertly. In this Taxi Driver scene breakdown, we’ll look at all the elements surrounding Robert De Niro’s iconic improv monologue that make this such a haunting moment.

Perhaps the most interesting part of this scene is how we switch between an objective perspective of Travis Bickle to a more subjective glimpse inside his mind. In the first half of the scene, Scorsese makes us objective observers as if we were there in the room. He does this with a static camera, long takes, and diegetic audio that captures the ambient noise of the neighbors and the street outside. In the second half of the scene, we lose that diegetic audio and replace it with voiceover narration and Bernard Herrmann’s dark and moody score. The camera remains static but the editing kicks in to bend and twist reality — dissolving in between shots instead of cutting and a “double-edit” that replays the same moment twice.

With these opposing techniques, Martin Scorsese gave us two perspectives on Travis Bickle during his tipping point. Are we more uncomfortable with being in the same room with Travis or is it worse to occupy his headspace? No matter the answer, the “You talking to me?” Taxi Driver scene will go down in cinematic history. Probably more for its quotability but the directing and Robert De Niro’s performance are surely due the attention they deserve.

You Talking To Me? — How Scorsese Directed the Iconic Taxi Driver Scene 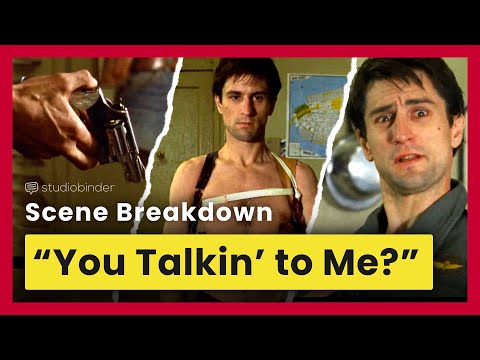 You talking to me? How Martin Scorsese the most iconic Taxi Driver scene. Read the "Taxi Driver Scene Breakdown" ►► https://bit.ly/td-sbd Re...