Continuing on we come to the tough part, the harder Epic Stages as well as the mental tiredness that comes from such a demanding rally as Monte-Carlo. Keeping this on easy was my safety net from a rally that can throw a lot at you all at once! As the stages kept coming I started getting clumsier, though the tyres lasted well until the final stage, where it then all fell apart..

0:02 La Bollène-Vesubie, 21.04km. The first Epic Stage! The poor cornering was entirely purposeful as I was attempting to work on my tyre wear management skills.. Turns out, lack of.. But after these 2 stages it's another ES and 2 regular stages.. Its going to get messy if I can't challenge my aggressive tyre wear issues.. So it was mostly an F1 wide apex turn style for the hairpins.. At least as much as I could stand not to throw the car in a fun drift..
15:04 Agnières-en-Devoluy, 7.53km. Night stage. I switch the rear tyres for hards. I started to get a bit clumsy, mentally tired from all the other stages back to back! Just silly knocks and no time loss but bad wear on my fronts from that ES!
20:18 service area. Tyre choice is super important now, an ES and 2 other stages! I need snow for the ES but they don't last well! And the last stage is a dry one but starting with 2 ice stages! So I throw on snow tyres and grab 2 hards for spares.
20:32 La Bollène-Vesubie reverse, 21.00km. Dawn ES!  First thought is tyre wear! Seccond is mentally drained already lol! I get through with 2 red sectors and a penalty but I'm still up on time and surprised with how big the gap is, regardless of blizzard free I'm up on last time!
36:03 Col de Braus, 7.27km. I'm shocked again, my tyres are dead! But I manage to safely get through the stage all green, but my attempt to manage wear has failed, the next stage needs to start on 2 very bad tyres!
41:44 Luceram reverse, 6.05km. As expected I'm all over the place! It's nothing too bad, I get through all green, it's good clear weather but I hit so many barriers and turning was very tough at times. If I even had low damage on I'd be cooked for sure!
46:34 service area. I put hards on and snow spares for the last stage thinking this will help get through both just fine. I've no more snow tyres so well worn it is.
46:46 Agnières-en-Devoluy reverse, 7.47km. Couple of clumsy tired moments spinning the car round but nothing major, right tyres to get through this stage.
51:55 Col de Braus reverse, 7.29km. Night stage. I attempt a cross tyre to get through a 36% snow stage that felt like a 90% snow! This was brutal and 2 well worn snow tyres did nothing to help me, the stage was lost but I went through to the end, it was a lesson in cross tyre for snow stages! It's not good! My poor car!
50:31 podium, results and rewards.
59:17 I got to change my sponsor to a 3 star already! 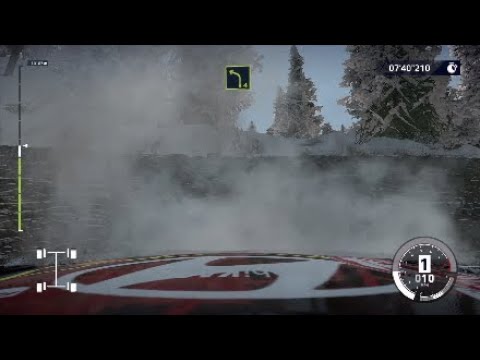 WRC 10 - WRC Career, Private Team. Monte-Carlo. Part 2! Continuing on we come to the tough part, the harder Epic Stages as well as the mental tirednes...