admin
Keith Huewen: What the hell happened between KTM and Remy Gardner?

A Ducati photo finish at Misano, a three-way title fight and KTM dropping Remy Gardner after just a single season are all on the agenda for this week’s Crash.net MotoGP podcast featuring Keith Huewen.

But with Bagnaia now second in the world championship, will team orders prevent such all-Ducati battles in future?

Joining Bagnaia and Bastianini on the podium was Aprilia’s Maverick Vinales, confirming his upward trend on the RS-GP.

But it was a subdued race for world championship leader Fabio Quartararo and Vinales’ team-mate Aleix Espargaro, who crossed the line fifth and sixth.

While the on-track drama went down to the chequered flag, the off-track controversy began on Thursday, when rookie and reigning Moto2 champion Remy Gardner confirmed he had been dropped by KTM for 2023 and is thus out of MotoGP after just a single season.

The reason given by KTM, according to Gardner, was “he had not been professional enough”. KTM motorsport director Pit Beirer insisted he had no knowledge of such words but did hint at needing riders that fully believed in the factory’s MotoGP project.

“I'm going to get on my soapbox and have a little bit of a controversial rant: What the hell happened between KTM and Remy Gardner?” said former grand prix rider and British champion Huewen.

“Wayne Gardner, dad of Remy, is off on one at the moment over this. And I don’t blame him, being a dad myself. But even if you've got a [rider] manager that's upsetting the management at KTM, who needs to be the bigger person in this? The bigger company in this?

“Where are KTM and their management, calming this down so they're getting the best out of their current Moto2 world champion, who has been with them in MotoGP for just seven months?

“Are they allowing this to get under their skin to the point where we are talking about accusations of their rider, or his management, being unprofessional? Somebody needed to be the bigger person in the KTM corner here and take control of this.

“Riders say things in the heat of the moment - that's perfectly normal. Michael Laverty’s [VisionTrack Honda Moto3] riders were a bit grumpy at Silverstone and they made it known to the press.

“And Michael basically said, we want riders to be forthright. We understand sometimes emotions get ahead of you and you say things you shouldn't. But it's up to me to manage that gap between what they're saying and the corporate side of the team.

“So the might of KTM, with the kind of talent they've got in a managerial situation, in my view - and it's only my view, I'd be interested to hear what everybody at home thinks - I feel that KTM have a certain percentage of blame for not managing the situation as well as they should as a corporation and as a team.

“I don't understand how they've let it get to the point where we've got mudslinging in public. Ridiculous.”
#motogp #motogppodcast #bagnaia 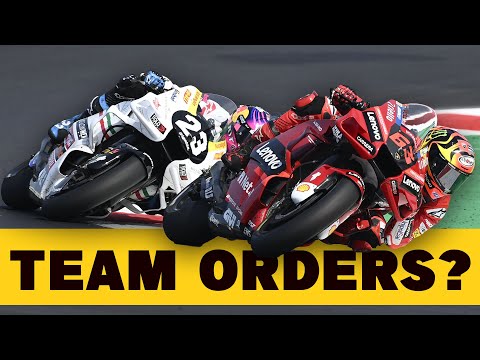 Keith Huewen: What the hell happened between KTM and Remy Gardner? A Ducati photo finish at Misano, a three-way title fight and KTM dropping Remy Gard...