admin
What is a jump cut — the ultimate guide to how to jump cut and when to use jump cuts plus some of the best jump cut examples to inspire your own projects.

What is a Jump Cut? 5 Ways to Use Jump Cuts in Film ►► https://bit.ly/wi-jc
Thelma Schoonmaker Editing & The Irishman ►► https://www.youtube.com/watch?v=3VszXdrCi6A
StudioBinder Blog ►► http://bit.ly/sb-bl

Jump cut editing has been a part of film language from the very beginning. Though its invention is believed to be a happy accident, the intentional use of jump cuts has evolved for a variety of purposes. In this jump cut tutorial, we’ll cover 5 different applications of this editing technique — not just how to jump cut, which is very simple, but also when to use jump cuts to tell a better story.

The first jump cut example is to simply create a stylish presentation. Think of the opening character introductions in Guy Ritchie’s Snatch and how the jump cuts create a rhythm and style that lures us into this darkly comedic yet dangerous criminal underworld. We can also look at Terrence Malick’s films like The Tree of Life, a film presented as more of a memory and/or dream. In this case, we can see how to use jump cuts to create a lyrical or poetic narrative that isn’t beholden to strict and rigid structures.

The second jump cut example is used to create energy. Consider Run, Lola, Run and how our main character’s frantic race against time is accelerated by jump cuts. Or what about Mad Max: Fury Road where the action is adrenalized by cutting out nearly imperceptible frames.

Closely related to this jump cut technique is when they are used to accent a particular mental state or emotion. Usually, this is a frenetic or fragmented frame of mind, which is a perfect opportunity for some creative jump cut tricks. Think of the moment in The Departed when Billy realizes his cover may have been blown. He packs his go-bag in a fit of panic and with some extremely subtle jump cuts, we can better understand his urgency.

The montage is also an opportunity to use jump cuts. As one of the primary benefits of the montage is to condense time and what better way to do that than with a jump cut? In Spielberg’s bleak Holocaust drama Schindler’s List, we have a short montage constructed solely with jump cuts. As Oskar interviews new secretaries, we use jump cut editing, along with blocking and staging, to tell the whole story.

Finally, in our last jump cut example, we have the axial cut. An axial cut is more of a subtype of the jump cut as it doesn’t jump forward in time but rather towards or away from the subject along the same axis. Alfred Hitchcock used this technique often including the first moment of pure panic in Psycho as Marion is attacked in the shower.

How to jump cut is easy but knowing when to use jump cuts is the real question. It is a jarring technique that could easily pull your audience out of the movie. So, as you work in jump cuts into your next project remember these techniques and applications. 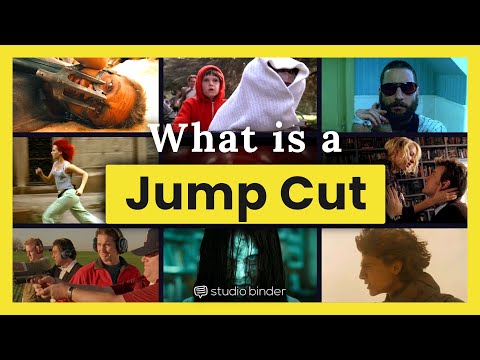 What is a jump cut — the ultimate guide to how to jump cut and when to use jump cuts plus some of the best jump cut examples to inspire your own proje...