What are Muda, Mura, Muri? And, what are the 7 Wastes of Lean?

And, what are the 7 Wastes of Lean?

The starting point for Ohno’s reforms was the idea of waste, or ‘Muda’.

Ohno wanted to eliminate all possible forms of waste. So, he identified the seven categories that are often known as the ‘Seven Wastes’.

Some people add other wastes to Ohno’s original seven, most commonly placing Non-used employee talent (wasting skills) between number 3 and 4 in my ordering, so create the mnemonic acronym: DOWNTIME.

Ohno also developed a system of signboards that track the progress of goods through the manufacturing process, which are called ‘Kanbans’. The kanban board is now widely used in managing software projects under agile project management methodologies.

So, what of Mura and Muri
Less is said about these in the Production environment. But I believe they are both vital to us, in the Project environment.
Mura: Inconsistency
We need to be adaptable and not stick slavishly to fixed methods. But it is also important to create consistency where we can, to produce a controlled project environment. Key elements of this are:
• Governance
• Control
• Efficiency

What are Muda, Mura, Muri? And, what are the 7 Wastes of Lean? 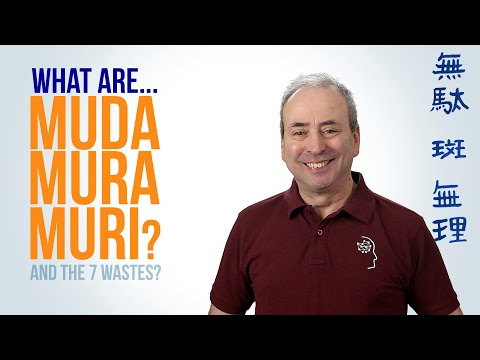 In Japan, waste is generally known as ‘muda‘, meaning wasted effort. In fact, there are other forms of waste: ‘mura‘ and ‘muri‘. • Muda: Wasted effort...