admin
This week we are excited to welcome Dr. Scott Bellamy to the WSH. Scott is the Mission Manager for NASA's Double Asteroid Redirection Test (DART) mission which successfully launched in the early morning hours from Vandenberg atop a SpaceX Falcon 9 rocket on November 24, 2021.

Scott Bellamy is one of the Mission Managers in the Planetary Missions Program Office (PMPO) at Marshall Space Flight Center (MSFC), Huntsville, AL. Presently, Scott is responsible for day-to-day oversight of the Europa Clipper flagship mission, as well as the Double Asteroid Redirection Test (DART) mission.

DART's mission is to conduct a real-life experiment in changing an asteroid’s orbit through kinetic impact. In late September 2022, DART will intercept the moonlet (i.e., Dimorphos,) of the asteroid Didymos — a binary system — and slow Dimorphos’ orbit by up to 10 minutes. DART is the first-ever mission of this type and is sponsored by NASA’s Planetary Defense Coordination Office.

Europa Clipper, on the other hand, will launch in October 2024 to perform a detailed exploration of Jupiter’s ocean-world moon, Europa. This mission will provide priceless information on the thickness and composition of the ice shell to possibly enable a future mission to land a probe on Europa and search for microbial life.

Prior to these missions, Scott was simultaneously the Mission Manager for another project that we at CosmoQuest hold near-and-dear to our hearts, the Origins Spectral Interpretation Resource Identification Security-Regolith Explorer (OSIRIS-REx) mission to obtain and return the first-ever United States asteroid sample; the NASA Evolutionary Xenon Thruster–Commercial (NEXT-C) project providing DART’s primary propulsion; and the Near Earth Object Surveyor (NEO Surveyor) mission to provide the capability for detecting low-observable asteroids.

Scott originally came to Marshall Space Flight Ccenter as the Air Force Liaison Office in 2008 and afterwards retired with over 25 years of service. He then served in several roles, including being a member of the very small team that shaped what later became the Space Launch System (SLS), before joining the Planetary Missions Program Office in 2013.

► Subscribe to our podcasts Astronomy Cast and Daily Space where ever you get your podcasts!

► Become a Patreon of CosmoQuest https://www.patreon.com/cosmoquestx

► Buy stuff from our Redbubble https://www.redbubble.com/people/cosmoquestx

Don't forget to like and subscribe! Plus we love being shared out to new people, so tweet, comment, review us… all the free things you can do to help bring science into people's lives. 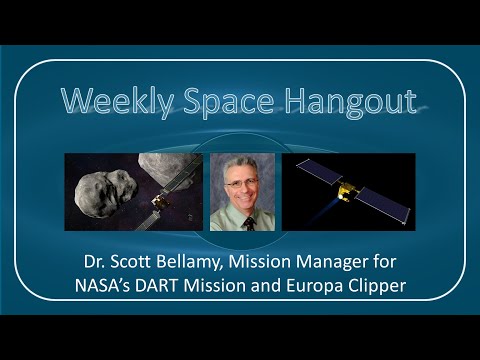 This week we are excited to welcome Dr. Scott Bellamy to the WSH. Scott is the Mission Manager for NASA's Double Asteroid Redirection Test (DART) miss...