I have a question, sir, Mr. Buffett, about your operating management style. In my opinion, the mainstream media minimizes the significance of your nonpublic operating investments.

When you consider capital allocation in these companies, do you have the managers submit annual business plans? And if so, do you formally meet with those managers to see how well you can track progress against those plans?

WARREN BUFFETT: Yeah, that’s a good question. And the answer is that we may meet with some of them annually, we may meet with others semiannually, but we have no formal system whatsoever, and we will never have a formal system. We don’t demand any meetings of any of our managers. We have no operating plan submitted to headquarters.

Some of the companies use operating plans themselves, some of them don’t. They are all run by people who have terrific records, and they have different batting styles. And we’re not about to tinker with somebody that’s batting with .375 just because somebody else holds the bat a little differently or uses a different weight bat, or something of the sort.

So we believe in letting them do, currently and in the future, what has been successful for them in the past.

And different people have very different styles. I’ve got my own style, you know?

And that really isn’t a problem. What we want to have is good managers, and there’s more than one way to get to, at least, business heaven, and we have a number that have found different ways to get there.

So we have never imposed — we have certain requirements because we’re a public company, and SEC requirements, and International Revenue Service coordination.

But we’ve never imposed anything from the top on any of the operating managements.

We have MBAs running companies, we have people who never saw a business school. And talent is the scarce commodity, and when you find talent and they’ve got their own way of doing things, we let it — we’re delighted to have them do it. More than letting them do it — we want them to do it their way. We don’t want to change them.

CHARLIE MUNGER: Yeah, the truth of the matter is that we have decentralized power in the operating businesses to a point just short of total abdication. (Laughter)

And we don’t think our system is right for everybody. It has suited us and the kind of people that have joined us. But we don’t have criticism for other people, like Emerson Electric or something, who have operating plans, and compare performance quarterly against plan and all that sort of thing. It’s just not our style.

WARREN BUFFETT: Yeah, we centralize money and — (laughs) — everything else we decentralize, pretty much, but —

I don’t know whether you’ve met him here, but for example, Al Ueltschi is here. He started FlightSafety in 1951 and he’s — I don’t know what he’ll spend on simulators this year, but it could easily be a hundred million dollars or thereabouts.

And he — if I spent hours with him, I couldn’t add 1/100th of 1 percent to his knowledge of how to allocate that money. It would be ridiculous. It’d be a waste of his time and it would be an act of arrogance on my part. And I have no worries about how Al allocates the money. And that’s an unusually capital intensive business compared to most of our businesses.

There’s some that I get into the details more because I just worked with the person that’s running things a long time and we kind of enjoy it.

Ajit and I talk virtually every night about the reinsurance business. You know, I am not improving the quality of his decisions at all, but it’s an interesting game and I like hearing about it, and he doesn’t mind talking about it, so we talk them over. But that’s just a matter of personal chemistry.

And as we add managers, we will adapt to them. We adapt our accounting systems, to a degree, to them. Now, we do have certain requirements that result from the SEC and IRS. But we don’t — our managers know their businesses and they know how to run them. 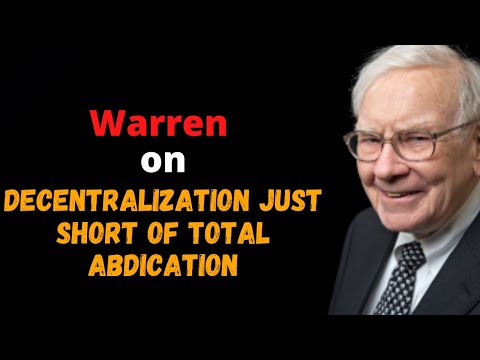