Ultimate Guide to Diegetic vs Non-Diegetic Sound — Definitions, Examples, & How to Break the Rules

admin
Diegetic vs Non-Diegetic Sound Explained — A complete guide to film sound, the definitions of both types, their various applications, and how some filmmakers break the rules of sound to tell better stories.

Film sound comes in two basic types — diegetic vs non-diegetic. Each has a role in the cinematic experience, and in this video, we’re going to explain everything. Including the definitions of each type, their most common and not-so-common applications, and how filmmakers can use the soundtrack to tell better stories.

We always say that we “watch” movies, but have you ever really “listened” to a movie? There is quite a lot of storytelling happening on the soundtrack, but we usually take it for granted. Naturally, our eyes do the heavy lifting as they process all that visual information, but film sound is actually an unsung hero in the overall experience.

WHAT IS DIEGETIC SOUND

To understand diegetic vs non-diegetic sound in film, we first have to understand what “diegesis” means. The concept of diegesis goes all the way back to the Ancient Greeks and it refers to “the act of narrating a story,” including the details the narrator adds or leaves out. In film, this essentially means “the world of the film and everything in it.” And when it comes to film sound, if the characters can hear it, it’s diegetic; otherwise, it’s non-diegetic.

But which is which and why does it matter? Let’s continue with a breakdown of diegetic sound.

Again, if the characters can hear it, it’s diegetic sound — even if they only hear it in their head. This is called internal diegetic sound and includes thoughts, narration, music, etc. We can also divide diegetic sound into two subcategories: on-screen and off-screen. This refers to the source of the sound. When we hear birds in a forest scene but can’t see them, it’s still considered diegetic.

On the other hand, non-diegetic sound is everything the characters cannot hear. This includes sound effects, some forms of narration, and, the most common element, the musical score. But sometimes sound can actually switch between diegetic vs non-diegetic, which is called trans-diegetic sound. This often helps to blur the line between fantasy and reality.

There are countless ways to use film sound to lure us into or shock us out of the cinematic experience. Now that you know the basics of diegetic vs non-diegetic sound, it’s your turn to make us truly listen to a movie.

Looking for a production management solution for your film? Try StudioBinder for FREE today: https://studiobinder.com/pricing

Ultimate Guide to Diegetic vs Non-Diegetic Sound — Definitions, Examples, & How to Break the Rules 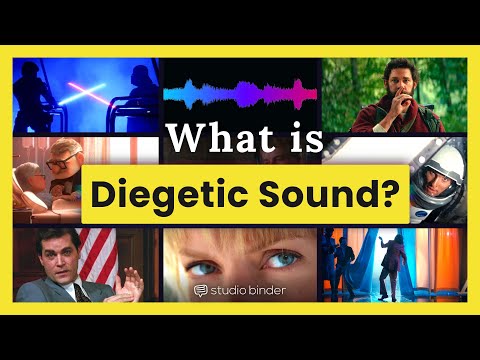 Diegetic vs Non-Diegetic Sound Explained — A complete guide to film sound, the definitions of both types, their various applications, and how some fil...