#Emotion associated with the soul is essential in human life. If someone told me that I would never have that excitement, he could never be human. That excitement can be of two types. Excitement that gives happiness, excitement that gives happiness., These are the cases of jealousy, impatience and aggressionIn it today I talk about anger. The reality is that anger manifests itself in a man’s life. In that sense human anger can be viewed in four stages.Some people become personally angry because anger develops when there is a lack of psychological coordination with a particular person or group, and some people become angry when they are not close to them. Anger can then be controlled when the cause of the anger is known and acted uponThere is another type, who gets angry at certain times. Because when they are on the road, anger is manifested by the psychological crises that occur during work.There is another type.They will get angry at some point. When the opportunity arises for them to do so, they express their anger aggressively when nothing is in their favor.There is another type. They will get angry anytime, for no reason. They are a bit bad. They are the ones who have to take training to control their anger. From the Islamic point of view, they are the companions of Satan. So when anger is not controlled it can have great consequences.Especially the fourth type I mentioned will have great consequences. We will be able to live better when we deal with anger control methods. In the next video we will see how to manage anger. 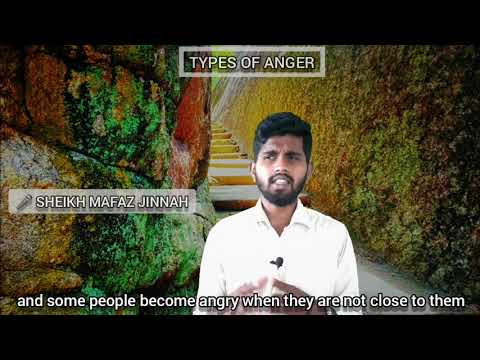