admin
Blockchain technology has transformed the financial services industry over the past decade. The rise of cryptocurrencies and non-fungible tokens (NFTs) highlight the massive shifts in how people, organizations, and governments spend and make money. Meanwhile, blockchain experts are discovering new pathways to use the technology to run fairer, more sustainable businesses.

In this fireside chat, recorded on October 27, 2021, Daylight Lab director Nick Merrill was joined by Jake Hartnell, co-founder of Stargaze, a decentralized, self-governed social protocol that integrates NFTs, social tokens, and decentralized autonomous organizations (DAOs). Hartnell explained how tokenized governance enables radical new forms of collective organization and ownership. He demonstrated how this tokenized system of collective ownership works for DAOs, and how networks like Stargaze are challenging business models that extract value from users and leave no room for popular governance.

Jake Hartnell is the co-founder of Stargaze, as well as a core contributor of Juno Network and InterWasm DAO. Previously, he was the founder of Common Garden, an open-source agriculture technology start-up, as well as an early member of Hypothes.is where he worked on web annotation technology and standards. He graduated from the UC Berkeley MIMS program in 2014, and was an affiliate with E.E.C.S. in 2016.

Nick Merrill directs the Daylight Lab at the UC Berkeley Center for Long-Term Cybersecurity. His work is built on a simple observation: that security is difficult to practice in part because it’s difficult to understand. His lab’s work shifts the way people understand and identify the harms of technology—and expands the populations able to do so. By generating novel tools, practices, and representations, we make “security” specific and actionable to those who need it. Nick has published over a dozen articles in peer-reviewed venues such as ACM CHI, DIS and CSCW.

Learn more about the Center for Long-Term Cybersecurity at https://cltc.berkeley.edu. 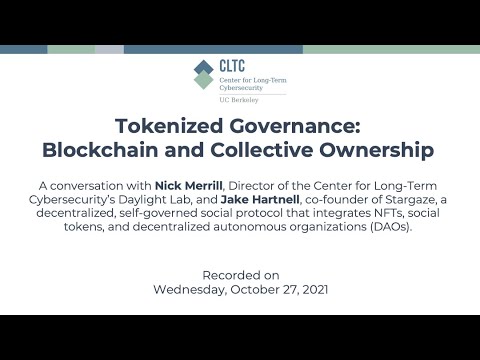 Blockchain technology has transformed the financial services industry over the past decade. The rise of cryptocurrencies and non-fungible tokens (NFTs...