admin
Kawhi Leonard and the Clippers are not looking good. | ✅ Click here to buy Jarritos: https://2cart.net/180100bj

The Kawhi situation isn’t looking good but somehow, no one’s talking about it. I honestly feel like it’s becoming accepted as the norm. When everyone just assumes you’re not gonna play, yeah that’s a problem.

Just two seasons ago, the Clippers looked to be part of a championship team. But that was derailed by Kawhi getting hurt.

Now, Kawhi doesn’t look the same and that’s fine. He tore his ACL in the 2021 playoffs. He’s missed a whole season. It’s going to take time to get his legs under him so that 13.7 points per game in 25 minutes is not the worst. Apparently he’s still recovering from injury but which one?

If we look at Kawhi’s game log so far, it’s weird. Of course Kawhi isn’t going to play back to backs, but it’s a game here, the. Kawhi hasn’t played more than 3 games straight this season, has missed an 11 game stretch, followed by playing 3 games, followed by missing another 6 game stretch. What’s going on?

And if this is the case that his ACL tear is unique, then that also needs to be under consideration. Has Kawhi simply become more injury prone?

After opening night, Kawhi stated that his knee felt a bit stiff and then boom disappeared till his re entry in November. Then Kawhi had a right sprained ankle in mid November. However, there’s a lot of confusion amongst even the Clippers organization on what’s going on.

Kawhi has said that he wants to be out there, that we wants to play, but guesses that the medical staff has his best interest, but he’s also said that.

But not only has the minute restriction been strict, he’s also missed 2/3rds of the season already.

The priorities with Kawhi have always been for the end of the year but we’ve seen this before. And the Clippers have no where to go.

The season before, Kawhi played in 79% of his games, followed a similar routine to what he had done with the Raptors where he played 73% of games. But there was one grave miscalculation. The Raptors were an established team adding one piece major piece, aka Kawhi. The 2019 Clippers were a lot of new pieces coming together. And with other players also missing the game, the team never truly found chemistry. And in the playoffs, every slight weakness is exposed. Ask Rudy, Ben, anyone.

As expected, the Clippers have not done well when Kawhi misses games. In the 10 games Kawhi’s played they have an 8-2 record. In the 20 games he’s missed they’re 9-11.

The offense this season is 30th in points per game at 107.6. The offensive struggles should be expected. Every night is like a game show, “whose playing for the Clippers?”

For better or worse, the Clippers are going to play it safe with players. They’re focused on the playoffs. The same way the Raptors rested Kawhi so he could play every game of the post season, the Clips want to have him available for the stretch run. But with so many other key guys missing games that strategy doesn’t make as much sense because you’re not going to make the playoffs. Since Kawhi arrived in LA, the Clippers win 71% of the games he plays and only 51% of games he misses.

After what went down between Kawhi and the medical staff right after his ACL injury, it seems the medical staff took a full 180. After Kawhi told them he had stiffness opening night, he’s been receiving 24/7 on the clock treatment. The way they’ve slowed his progression compared to the average acl recovery time, it’s clear they don’t want to make any mistakes. It’s also hard to tell who’s pulling the strings. Is it the organization or is it Kawhi and the organization is willing to take the brunt of the blame.

But like I’ve said before, the Clippers are not getting any younger. ****They traded all their picks and lost to that team. What are we doing here? I will give the Clippers players props in that they all seem to be fine with each other, and don’t let Kawhi sitting out create a rift between them like the Spurs did. This is meant to be a championship team. With all these new pieces, changing lineups, conflicting reports, how do you being to build on-court chemistry? 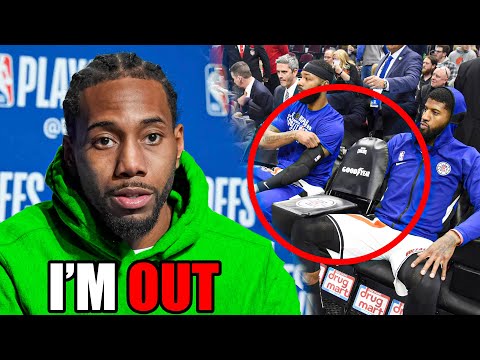