The training montage was certainly “a thing” in the ‘70s and ‘80s. Ignited by the Rocky training montage, these sequences became a dime a dozen, so much so that these days they exist mostly as parodies. But that’s not to say that there isn’t still an opportunity to use the training montage in unique and powerful ways. In this video, we’re going to look at two scenes in particular: the Creed 2 training scene and “The Cruel Tutelage of Pai Mei” sequence from Kill Bill Vol. 2.

There are three elements that you can always count on in a training montage — the use of repetition to show progress, an inspirational soundtrack, and a triumphant conclusion. Just like the traditional montage, a training montage is designed to accelerate the storytelling in a short amount of time. We obviously don’t have time to watch characters study for a test, or master a particular skill, or train for the big fight. And, so, repetition is a technique that gives us the impression of time and progress. To bring real momentum to the training montage, filmmakers use some adrenaline-pumping music with motivational lyrics to help push the hero through their training. And, finally, the capper that brings the sequence to a close is the triumphant conclusion: that moment when the hero is now ready to face the challenge ahead.

One variation of the typical training scene is the “Master and Apprentice” training montage. Think of Yoda training Luke, or Mr. Miyagi training Daniel — not only do we follow a hero’s transformation, we also often see an evolution in the relationship between master and apprentice. In Kill Bill Vol. 2, we get a quick training montage as Beatrix is trained by the legendary Pai Mei. Director Quentin Tarantino uses crash zooms to make Pai Mei as intimidating as possible, along with high and low angles to show his power over his apprentice. But as the Pai Mei training montage continues with repetition and more eye level camera angles, we see Pai Mei finally accept his apprentice.

In the Creed 2 training scene, we have an example of a “Hero and Villain” training montage. This is when we see both protagonist and the antagonist training simultaneously. As Adonis Creed toils away in the desert in a grueling training regimen, we also see Viktor Drago pushing himself just as hard in a top of the line training facility. For even more contrast, we see two distinct color palettes — orange for the Adonis scenes and blue for Viktor. The parallel editing between these two sequences allows the viewer to assess the progress of both challengers as they head into the climactic battle.

There are certain aspects one expects from a training montage but there are also ways to keep them fresh and exhilarating. We can see that creativity in sequences like the Creed 2 training scene and the Kill Bill training montage. 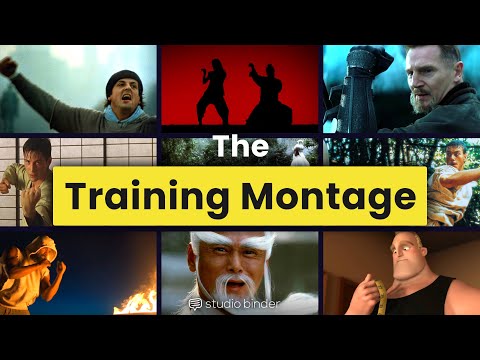