Last year in May, the European Commission announced the adoption of the Biodiversity Strategy 2030. According to the Commission, this document, as an essential element of the European Green Deal, ‘is a comprehensive, ambitious, long-term plan aiming at nature conservation and to reverse ecosystem degradation. The strategy aims to restore Europe's biodiversity by 2030, through specific actions and commitments’.

As a consequence of its provisions, the Forestry Strategy 2030 was announced in July this year. The Commission proposed ‘a new strategy to protect and restore forests in the EU. It provides for strict protection of primeval and old-growth forests, restoring degraded forest stands and ensuring their sustainable management’.

Both documents have triggered a discussion in Europe as to whether the proposed solutions and the roadmaps to reach them are appropriate? Will they bring the European Union and its citizens a safe future? Will they help to resolve environmental and climate issues? Many politicians from all over Europe, representing different views, have expressed and continue to express various, sometimes wildly differing opinions. The scientific world provides assessments of such documents. The wood industry expresses its concerns. Also environmentalists, including foresters, are wondering what protection of forest ecosystems will look like after the provisions of both strategies have been implemented, and whether it will bring the intended results.


We want to discuss these problems and worries in our country as well. Therefore, the National Secretariat of Natural Resources, Environmental Protection and Forestry Independent Trade Union Solidarność came out with an idea to organise an international conference in Warsaw. It met with kind acceptance and support of the Minister of Climate and Environment, as well as the Director General of the State Forests.


The invitation was accepted by guests from Brussels, Estonia, Germany and Italy, by scientists, politicians, entrepreneurs, officials and foresters.

The event received an honorary patronage from the President of the Republic of Poland, Mr Andrzej Duda. 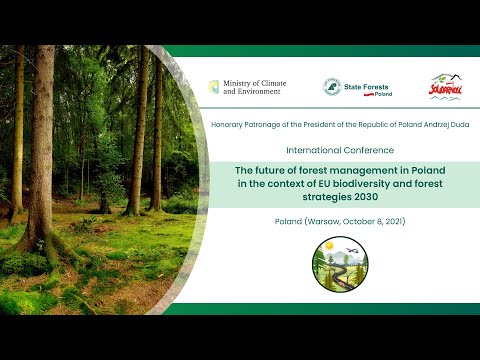 International Conference "The future of forest management in Poland in the context of EU biodiversity and forestry strategies for 2030" Last...