The Consequences of Capitalism with Noam Chomsky

Consequences of Capitalism, a new book by Noam Chomsky and Marv Waterstone, exposes the deep, often unseen connections between neoliberal 'common sense' and structural power. In making these linkages, the will show how the current hegemony keeps social justice movements divided and marginalized. And, most importantly, we see how we can fight to overcome these divisions. Is there an alternative to capitalism? Chomsky and Waterstone will chart a critical map for a more just and sustainable society.

Noam Chomsky is Institute Professor (emeritus) in the Department of Linguistics and Philosophy at the Massachusetts Institute of Technology and Laureate Professor of Linguistics and Agnese Nelms Haury Chair in the Program in Environment and Social Justice at the University of Arizona. His work is widely credited with having revolutionized the field of modern linguistics. Chomsky is the author of numerous best-selling political works, which have been translated into scores of languages. Recent books include What Kind of Creatures Are We?, as well as Optimism Over Despair, and Internationalism of Extinction.

Marv Waterstone is Professor Emeritus in the School of Geography and Development at the University of Arizona, where he has been a faculty member for over 30 years. He is also the former director of the University of Arizona Graduate Interdisciplinary Program in Comparative Cultural and Literary Studies. His research and teaching focus on the Gramscian notions of hegemony and common sense, and their connections to social justice and progressive social change. His most recent books are Wageless Life: A Manifesto for a Future beyond Capitalism (University of Minnesota Press; co-authored with Ian Shaw) and Geographic Thought: A Praxis Perspective (Routledge; co-edited with George Henderson).

Janine Jackson (host) is the program director at Fairness & Accuracy In Reporting (FAIR) and producer/host of FAIR's syndicated weekly radio show CounterSpin. Her work has appeared in various publications, including Civil Rights Since 1787 (New York University Press) and Stop the Next War Now: Effective Responses to Violence and Terrorism (New World Library).

The Consequences of Capitalism with Noam Chomsky 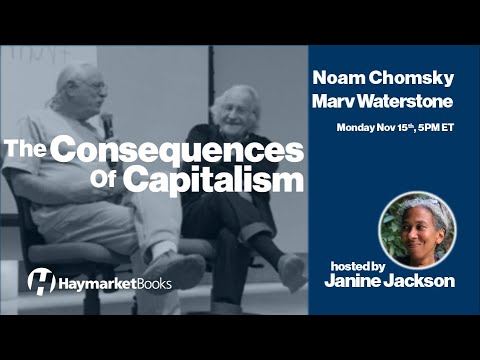