admin
In June 2021, the U.S. Centers for Disease Control (CDC) suspended, without notice, the importation of dogs from 113 countries considered to be high risk for canine rabies. According to the CDC, the suspension was necessary to ensure the health and safety of imported dogs as well as to protect the public’s health against the possible reintroduction of the canine rabies virus variant to the United States. The ban, which has received significant attention and media coverage, has had a significant effect on the lifesaving work of responsible international rescue groups who previously transported animals in need from around the world for adoption in the United States, and has also affected private citizens, military service members, and diplomats seeking to bring their dogs into the country.

Join us to learn more about legal issues relating to the CDC ban and associated topics, including: the recently announced upcoming agency rulemaking process; CDC and USDA authority in this area; different import approaches used in the EU, UK, and Hawaii; related proposed federal legislation; legal and veterinary measures taken by responsible rescue organizations to mitigate infectious disease risk and protect the public from zoonotic diseases; the benefits of dog importation for global animal welfare; and dog rescue as a space for positive international collaboration. 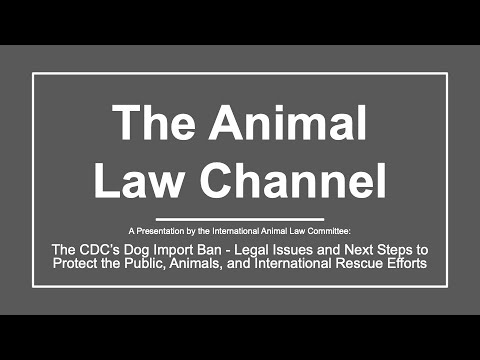 In June 2021, the U.S. Centers for Disease Control (CDC) suspended, without notice, the importation of dogs from 113 countries considered to be high r...