admin
he story of how a regular guy named Alfred Yankovic became the foremost pop culture satirist Weird Al through his mastering of the accordion and parodying rock and pop classics in the 80s including his breakout hit Eat It a parody of Michael Jackson’s 1983 #1 hit BEAT IT.

We Have New MERCH! https://bit.ly/ProfessorsMerch

Check Out My Hand Picked Selection Below

Purchase The Albums
Help out the Channel by purchasing your albums through our links! As an Amazon Associate I earn from qualifying purchases at no extra cost to you, thank you for your support.

Hey music junkies and vinyl junkies Professor of Rock always here to celebrate the greatest artists and the greatest 80s songs of all time for the music community and vinyl community.
If you’ve ever owned records, cassettes and CD’s at different times in you life or still do this is your place Subscribe below right now to be a part of our daily celebration of the rock era with exclusive stories from straight from the artists and click on our patreon link in the description to see our brand new show there.

I think everyone from my generation remembers the first time they heard the great Weird Al Yankovic… As an 80s kid there were few touchstones that we nerds revered… Star Wars, Mad Magazine, Video Games and Weird Al… so lets go back to the beginning: In 1966 at the age of 6, Alfred Yankovic came face to face with destiny when his mother purchased an accordion from a door-to-door accordion salesman. What are the odds? It actually only took young Al three years of practice before he was playing top 40 hits and writing parodies about them. At 13 Al discovered the Dr. Demento radio show, a wacky radio program that featured an eclectic collection of off-beat songs. Like any prepubescent boy would be, Al was mesmerized.

At 16, Al recorded a song about driving around town in his parents’ car called Belvedere Cruisin. He mailed it in to Dr. D and it became one of the show’s most requested songs. Al’s mind was blown. He remembers, “When I started out … Dr. Demento would play my stuff on the radio even though it was horribly recorded. I recorded it on a little cassette-tape recorder in my bedroom, just me singing along with my accordion. But he thought it was kind of a novel concept that some teenage kid was playing the accordion and thinking he was cool.” After this initial success, Al started submitting music to Dr. Demento on a regular basis.

Al was a smart kid. He graduated from high school as a 16-year-old valedictorian. His parents, not thinking music was promising profession, encouraged Al to pursue architecture. So, Al enrolled in Cal-Poly's prestigious architecture program. Growing up Al had been pretty shy, and it took him a while to open up in college. Because he was so quiet, his dorm buddies couldn’t figure out if Al was a lovable nutjob or a brooding serial killer. It was this perplexity that earned him the nickname Weird Al from his college classmates.

In October 1977, the newly named Weird Al and his friend Joel Miller started playing music at local coffee houses. It was of course a ridiculous line-up of songs. Sometimes Al would play his accordion and sing the entire periodic table of the elements. At first audiences were confused. But after the stunned silence, they couldn’t stop laughing. Al said, “We’d throw some funny songs into the set or we’d do medleys of a bunch of completely unrelated songs. And the audience went nuts... And I got this huge reaction from people.” 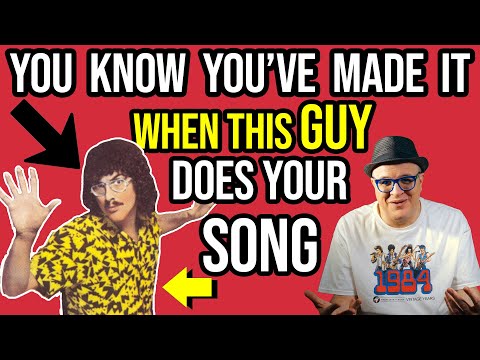 he story of how a regular guy named Alfred Yankovic became the foremost pop culture satirist Weird Al through his mastering of the accordion and parod...