admin
Ryan Pace appears to be on the hot seat with Matt Nagy as the Chicago Bears could look for a new GM and head coach regime in 2022. CBS Sports reports that Nagy won’t be retained next season and if that’s the case, Pace will likely be fired as well. On today’s show, Chicago Bears Now host Harrison Graham has 5 GM candidates to replace Pace as the next Bears’ GM.

Ryan Pace Replacements - 5 Chicago Bears GM Candidates for 2022
- Louis Riddick (ESPN analyst): Riddick spent time with the Redskins and Eagles front offices both as a scout and as a director of player personnel. Riddick has a close relationship with Ryan Pace and Matt Nagy, so that could hurt his candidacy.
- Joe Hortiz (Ravens Director of Scouting): Hortiz has been vital in drafting players like Lamar Jackson, Marquise Brown and others in Baltimore. He also learned directly under Ozzie Newsome for many years.
- Mike Borgonzi (Chiefs Director of Football Operations): Borgonzi spent over 10 years as a scout and has been Chiefs’ GM Brett Veach’s right hand man for several years. Part of a staff that identified Patrick Mahomes, Tyreek Hill and many other elite NFL players.
- Joe Schoen (Bills Assistant GM): Schoen has helped create Buffalo into a talent factory. They drafted and developed Josh Allen, traded for Stefon Diggs and have added other young talent in recent years. Schoen could potentially bring Bills’ OC Brian Daboll with him as a head coach/GM pairing with the Chicago Bears.
- Ed Dodds (Colts Assistant GM): Dodds is highly regarded in NFL circles. Indianapolis has drafted very well with guys like Quenton Nelson and Michael Pittman Jr. in recent years. Dodds could be the next Bears general manager.

Hit up Bears Now host Harrison Graham if you have a question on Justin Fields’ injury update: http://instagram.com/hgrahamnfl 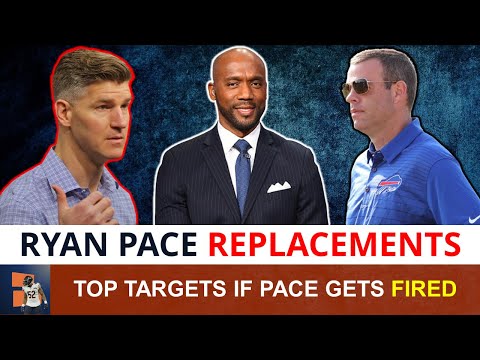 Ryan Pace appears to be on the hot seat with Matt Nagy as the Chicago Bears could look for a new GM and head coach regime in 2022. CBS Sports reports ...