admin
KwaZulu-Natal Premier Nomusa Dube-Ncube attends a three-day National Development Plan Conference which is hosted by the DPSA and UKZN, taking place at the university's Howard College campus, in Durban.

In order to deliver high-quality services to citizens in KwaZulu-Natal while building a capable and competent workforce, Premier Nomusa Dube-Ncube revealed that skills audits are currently being conducted for all public servants in the Provincial Administration including municipalities which has more than 200 000 employees.

Premier Dube-Ncube was speaking during the three-day Government Capacity and Performance Review Conference which begins today at the University of KwaZulu-Natal where issues related to enhancing the capacity of the state are under sharp focus.

The conference which is informed by the 10-year anniversary of the adoption of the National Development Plan (NDP) developed in 2012, is being hosted by the Department of Public Service and Administration, in partnership with the KwaZulu-Natal Office of the Premier, University of KwaZulu-Natal and the National Planning Commission.

Chapter 13 of the NDP commits the government to build its own capacity for the efficient and effective delivery of services, and to close the trust deficit between the government and citizens.

“At this conference we are confronting the challenge of uneven implementation that arises clearly out of capacity inadequacy across the state manifesting in uneven outcomes at local, provincial and national government. We are clear that these skills gaps lead to, and are also a result of weak accountability, persistent corruption emanating from a leadership skills deficit. The skills audit will assist us to ascertain whether as the KwaZulu-Natal Provincial Administration we have the required skills set to deliver services to our people. The skills audit in all the municipalities has been finalised while the skills audit in government departments will be finalised in 2023,” said Premier Dube-Ncube.

Premier Dube-Ncube highlighted that a functional and integrated government requires a professional, responsive and meritocratic public service cadre that is obsessed with efficiency and citizen-focused delivery.

“To be able to lead a state that is capable of playing a developmental and transformative role, this public service must be immersed in the development agenda but must be insulated from undue political interference. These factors must interact together in one direction to achieve the National Development Plan goals, and to lead the thorough-going transformation of our country at all levels,” said the Premier.

In addressing this challenge in KwaZulu-Natal, Premier Dube-Ncube said that at least 100% of municipal officials have been audited for skills and the audit revealed training needs for senior managers in among others, financial management, strategic capability and leadership, risk management, change management, policy development, and monitoring and evaluation.

“Our province has developed a Framework for Mentorship and Coaching to address the findings of the skills audit. Councillors are being capacitated on the complexities of the District Development Model through the Integrated Councillor Induction Programme and Sector Based Councillor Orientation Workshops. The capacity development of public servants has been conducted with 791 officials already trained. The repositioned Provincial Training Academy is prioritising key skills and capacity building interventions to improve service delivery in partnership with the National School of Governance (NGC) and other institutions. Our partnerships are not only ensuring that the curriculum offered in universities responds to the economy and skills needed by the province but to partner with university and NSG in the skilling, reskilling and upskilling of public servants,” said Premier Dube-Ncube.

To address corruption, Premier Dube-Ncube also announced that the Provincial Anti-Corruption Implementation Plan has been drafted based on the National Anti-Corruption Strategy that was approved in 2020. In addition, the Office of the Premier, together with the Department of Cooperative Governance and Traditional Affairs, the Special Investigations Unit, the Hawks and National Prosecuting Authority are working together as a forum in conducting the ethics and anti-corruption awareness campaigns.

The Government Capacity and Performance Review Conference which ends on 09 November 2022, brings together a variety of stakeholders working in the field of state capacity and government performance. This includes academics from across South African universities, researchers, public servants and cabinet leaders. 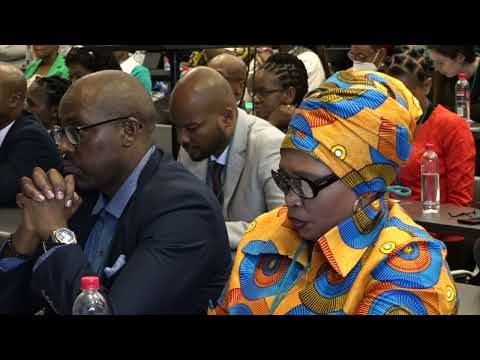 KwaZulu-Natal Premier Nomusa Dube-Ncube attends a three-day National Development Plan Conference which is hosted by the DPSA and UKZN, taking place at...