admin
Introduction:
On 8th November 2021 Pakistan Navy commissioned the first Chinese-made Alpha Guided Missile Frigate PNS Tughril. PNS Tughril is based on chinese Type 054 A/P Frigates. As per some Pakistani defense experts or think tank PNS Tughril is most advance Frigate in7777 the Indian Ocean region. So in this video we wil try to compare the most advance frigate of Pakistan navy with most advance frigate of indian navy i.e. INS Vishakhapatnam. So let’s get started.
PNS Tughril Deal:
The Pakistani Navy had signed a deal of total 4 type 054A/p frigates with China in 2017. One frigate has already been delivered to Pakistan in August 2020 and second one is ready for induction. China currently operates 30 Type 054A frigates. PNS TUGHRIL is a chinese type 054 A/P Frigate with some Pakistan specific changes. PNS TUGHRIL is said to be the third Pakistan Navy warship to hold the name PNS Tughril after an O-Class Destroyer (1951) and a Gearing-Class Destroyer (1980).
PNS Tughril specification:
The Tughril class ships are major surface combatant warships, designed for intense anti-air, anti-surface, and anti-submarine operations in the high seas. The ship has a total displacement of 4,000 ton and has a length of 440 feet. It has a 32-cell Vertical Launch System (VLS), equipped with the HHQ-16 Surface to Air Missiles, the Yu-8 anti-submarine rocket systems & 8 Air to Surface Cruise Missile launchers armed with the CM-302 supersonic anti-ship cruise missiles. It has a 76 mm PJ-26 main naval gun. It consists of 6 Anti-Submarine Torpedo launchers, 12 Type 87 Anti-Submarine rocket launchers, two Type 726-4 of 18-tube decoy rocket launchers and two Type 1130 CIWS. It is also loaded with multifunction electronically scanned array radar on top of the main superstructure. It uses SR2410C radar which is 3D multifunction ESA (electronically scanned array) radar slightly equivalent to the famous Smart-S Mk2 by Thales. The same radar has been installed in Bangladesh Navy C13B corvette which was built in China. According to manufacturer’s data, it has an air range of over 250 km and can track 150 surface and air targets simultaneously. It uses Type 517/SUR17B air surveillance radar. SUR17B radar is designed to automatically detect, record, process of targets, and send target data back to intelligence center. The radar is suitable for corvette, frigate and destroyer, etc., and could be adopted on land or island. It’s capable to perform medium and high altitude long-range surveillance”. Since it is “metric wave radar” it is said to be capable of surveillance and acquisition of stealth target and anti-radiation missile. It has a range of 300 km. The warship also featured a top-notch combat management system capable of integrated naval battle group formation operations with the rest of the Pakistani naval fleet.
==========WHOMSOEVER IT MAY CONCERN=============
Most of the pictures clip or BGM included in the Video
Belongs to their Respected Owners and we do not claim rights.
We are using them under following act:
=================DISCLAIMER=======================
UNDER SECTION 107 OF THE COPYRIGHT ACT 1976, ALLOWANCE IS MADE FOR "FAIR USE" FOR PURPOSES SUCH AS CRITICISM,
COMMENT, NEWS REPORTING, TEACHING, SCHOLARSHIP, AND RESEARCH. FAIR USE IS A USE PERMITTED BY COPYRIGHT STATUTE THAT MIGHT
OTHERWISE BE INFRINGING. NON-PROFIT, EDUCATIONAL OR PERSONAL USE TIPS THE BALANCE IN FAVOR OF FAIR USE.
Follow us on social media:
https://twitter.com/AnalysisDefense
https://indiandefenseanalysisofficial.blogspot.com/
https://www.facebook.com/Indian-Defense-Analysis-115230683684126
==============THANKS FOR WATCHING!================
PLEASE LIKE SHARE & SUBSCRIBE: "INDIAN DEFENSE ANALYSIS" 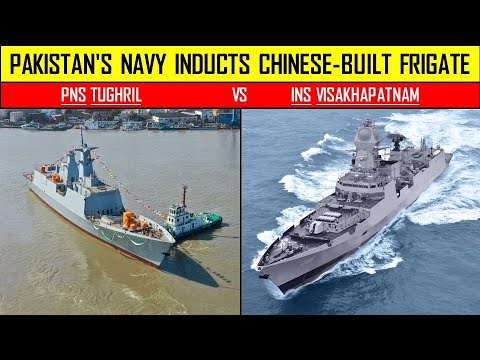