admin
This is one of those ephemeral, spine-chillingly beautiful music-moments we sometimes experience on our journey through life.

That says a lot about Charles, something about his “less is more” approach to things. About his sense of humor (shades of Slade), and besides, it was true. He was an “Expert.”

Charles hailed from Austin, Texas, but lived in a variety of small towns around the western U.S. and Canada, before settling in Boulder, Colorado in the late ’70s. He found his passion for music playing steel guitar and eventually found his way to the acoustic guitar and bluegrass music. His musical heroes ranged from Bill Monroe to Leadbelly, from Blind Willie Johnson to the Stanley Brothers. He loved The Carter Family, Woody Guthrie, Norman Blake and Clarence White. Though there were some styles he didn’t care for, (referring to them with names such as “blow dry” or “doodley doo”) he was sincerely respectful and helpful to all musicians.

Charles was best known as a member of “Hot Rize.” After being formed in 1978, Hot Rize became one of America’s best-known bluegrass bands. They recorded numerous albums including the Grammy-nominated, “Take it Home” in 1990. He performed internationally with the band, with concerts at the Grand Ole Opry, in Europe and Japan until they semi-retired in 1990. He also played the part of the silent bassist “Slade” in the band’s alter-ego comedy country-western group, “Red Knuckles and the Trailblazers.” The band performed halfway through every Hot Rize show.

When Hot Rize disbanded in 1990, Charles joined forces with Peter Rowan, and also formed his own band, “The Whippets.” He recorded and toured with various groups in the U.S. and overseas and also produced some excellent records by a variety of different bluegrass and folk artists. In addition to a few Hot Rize “reunion” gigs, Charles started writing music, his first song would be, “The Butcher’s Dog.”

Charles stayed amazingly active despite beginning his bout with leukemia in 1993. He had a bone marrow transplant in 1997, and suffered the many ups and downs related to his various treatments. Somehow through that suffering he seemed to grow an extra dimension as a person. The worse he physically looked, the more you could see the beauty of his soul. He treasured his life and his friends, and his studio, “Rancho DeVille,” his pride and joy in his later years.

Devotion to his friends… devotion to quality. A passionate but gentle nature… his soft voice and the way he could make a guitar talk and sing… that’s our Charles. “The Bluegrass Mystery,” the “Expert.” He is sorely missed.
Source https://www.hotrize.com/band-members/charles-sawtelle 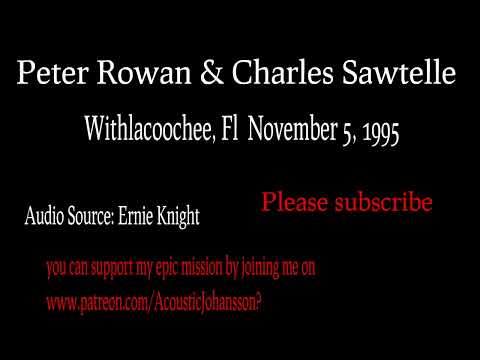 This is one of those ephemeral, spine-chillingly beautiful music-moments we sometimes experience on our journey through life. 01. Dustbowl Children 02...