Authorities remove snow from major roads to normalise traffic in Murree, say police.
Roads leading to Murree from Islamabad and Rawalpindi will remain closed today, says traffic police spokesperson.
More than 20 tourists, including women and children, lost their lives in freezing temperatures at hill station Murree. Most died in their cars as they were trapped in road jams.

MURREE: A day after the tragic deaths of more than 20 tourists in Murree, the authorities have removed snow from all the major roads to normalise traffic at the hill station, Punjab’s traffic police said Sunday morning.

In a statement, a spokesperson for the Punjab police said that all the key arteries of the city have been cleared for traffic. Lawrence College Road and a section of the road between Jhika Gali and Lower Topa Express Highway have been reopened for traffic, he added.

The spokesperson, however, said that roads leading to Murree from Islamabad and Rawalpindi will remain closed today. He said that police officials have been deployed on the roads to stop tourists from moving towards the hill station amid the current weather situation.

During the last 24 hours, over 500 families have been shifted to safe sites from the snowfall-affected Murree, the police said, adding that over 600 vehicles have been evacuated from the hill station till last night.

600 to 700 vehicles were evacuated from Murree: Gill
Meanwhile, sharing a video of Murree roads on his Twitter handle, Special Assistant to Prime Minister (SAPM) Shahbaz Gill confirmed that all key arteries of the hill station have been cleared to traffic.


Paying tribute to the personnel of the Pakistan Army, officials of the district administration, Rawalpindi police and the local volunteers for clearing the roads overnight, Gill said that 600 to 700 vehicles had been evacuated from the hill station till last night (Saturday).

The police officer said that the vehicles stuck in snow have been shifted to safe sites, adding that they have been facing difficulty in removing snow from the roads due to the vehicles. The road between Klidna and Barian will be reopened for traffic today, he added.

Army personnel rescue more than 300 people from Murree
According to a statement released by the Inter-Services Public Relations, all main communication arteries in Murree have been cleared for all types of traffic.

Per the statement, major roads, including Kuldana and Barian, have also been cleared for traffic. After the clearance of main roads, army engineers are now focusing on road links.

Meanwhile, relief camps and medical facilitates are operating at full capacity and army transport is plying for moving of stranded tourists to Rawalpindi and Islamabad, the military's media wing said.

A day earlier, following the federal government's decision to deploy personnel of the Pakistan Army and other civil-armed forces for rescue operations in snow-hit Murree, the army rescued more than 300 people, including children, the Inter-Services Public Relation (ISPR) had said.

The rescued people were provided medical care by a team of army doctors and paramedics, the military's media wing had said.

According to a statement, cooked meals had been served to more than 1,000 stranded people in Jhika Gali, Kashmiri Bazar, Lower Topa and Kuldana.

ISPR had said that the stranded people had been accommodated and provided shelter with meals and tea at Military College Murree, Supply Depot, APS and Army Logistics School Kuldana. 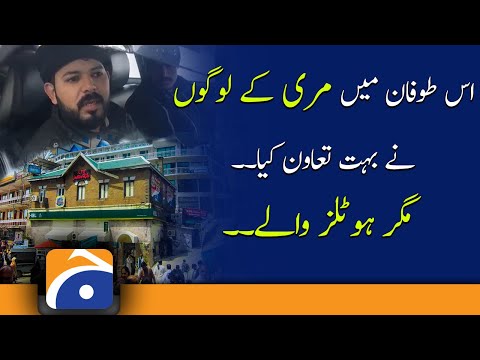