NFTs with Witek Radomski and Caleb Applegate of Enjin

admin
In March of 2021, the phrase NFT or Non-Fungible Token dominated the mainstream media when a 69 million dollar jpg was sold to the highest bidder. Our guests today are key figures in a company that has been utilizing this technology for years across multiple sectors. We are joined by CTO, Witek Radomski, and COO, Caleb Applegate of Enjin, an emerging NFT company. Enjin has operated within the gaming space for the past 12 years, and in 2017 broadened its focus to include the construction of an NFT ecosystem. Their goal is to build a comprehensive and scalable ecosystem that meets the demands of, not only the modern gaming industry but also multiple use cases beyond that. In our conversation with Witek and Caleb, we discuss the formation of Enjin and how it first recognized the potential for blockchain technology in the gaming sector. Witek unpacks their focus on the gaming sector and explains why they were dedicated to creating a metaverse across games and gaming platforms where users could transfer their assets. Tuning in you’ll hear the finer details of how NFTs function in the gaming sector and other use cases as well as Enjin’s approach to scalability with regards to NFTs and some of the programs they’ve launched to support that. Witek and Caleb share examples of work they’ve done with clients like Microsoft and Samsung and reflect on their hopes and expectations for the future of NFT technology and its application for the average user. For all this and much more, tune in today!

Key Points From This Episode:

● Introducing today’s guests Witek Radomski and Caleb Applegate of Enjin.
● How NFTs and blockchain technology can make games interoperable.
● How Enjin was first established twelve years ago when it recognized the potential of blockchain technology in the gaming sector.
● Witek gives a rundown of Enjin’s history and how they went from zero to 20 million users over the course of eight years.
● How Enjin first implemented blockchain technology and how it contributed to the NFT sector.
● The ERC1155 standard, how it was developed, and how it is currently being implemented.
● How their mission to create a metaverse in gaming was the initial driving force for the company.
● How the metaverse enriches the gaming experience.
● What Witek and Caleb envision for gaming, blockchain, and the potential for a gaming metaverse in the next five years.
● Enjin’s approach to scalability with regards to NFTs and some of the programs they’ve launched to support that.
● Why Enjin chose to build Efinity on Polkadot.
● How Efinity is facilitating interactions with NFTs.
● How Ethereum and Polkadot measure up against one another in terms of layer two solutions.
● Why Enjin is currently focusing on optimizing their interface for average users.
● Some of the exciting elements that Enjin has been working on and will be releasing soon.
● How Microsoft, Samsung, and other companies have utilized Enjin’s technology and services.
● The Enjin coin that was first deployed in 2017 and how it has grown.
● Caleb and Witek’s hopes for the future of NFTs and the crypto sector.

“We grew that to 20 million users over eight years and we realized a lot of our users were running things like Minecraft servers and gaming servers. They would basically take donations from players in order to get perks in the game.” — @witekradomski [0:04:56]

“The game developers haven’t really been flexible, especially when, if you’re not a top-tier company that can provide APIs for people to feed into, it’s really a walled garden and it’s hard for people to want to create a community and do that.” — @witekradomski [0:09:56]

“I think what I’m excited about is just education for the masses. We still have a lot of people who don’t really understand what a non-fungible token is and its practical application across any kind of industry really.” — @calebapplegate [0:34:41]

NFTs with Witek Radomski and Caleb Applegate of Enjin 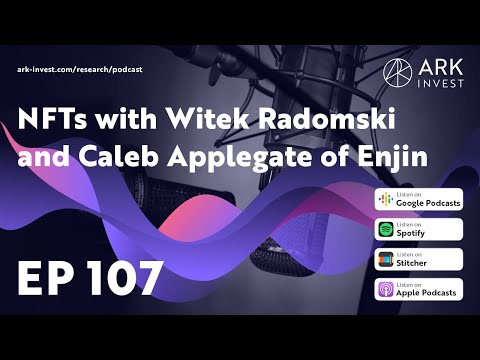 In March of 2021, the phrase NFT or Non-Fungible Token dominated the mainstream media when a 69 million dollar jpg was sold to the highest bidder. Our...