I found a VHS copy of this dance I filmed in the early 1990s featuring Exodus Nuclear vs Metromedia vs Rambo Sound. Anthony Red Rose seems to be one of the promoters of this dance, as he is seen at the start of the video holding a bag and collecting entrance fees at the gate. Daddy Lizard and Flourgan also appear on Rambo Sound. The video is edited as Part One and Part 2. This is part one of the dancehall clash.

Founded in 1986 by Father Romie, Exodus Nuclear Sound has been one of Jamaica’s most influential sound systems. The ‘sound’ wields its sphere of influence in the Red Hills and Manning’s Hill roads sections of the Corporate Area. It is even immortalized in songs by deejays including Popcaan, Vybz Kartel, and Cham.

While most studios are known for famous songs made in their confines, Exodus Studios has built its name on dubplates, landing its powerful name among the greats.
Anyone who is anyone in the dancehall business has voiced a dub at 90 1/2 Red Hills Road. Built-in the late '90s, it is the place where dancehall's premiere exponents gathered to earn a few - or many - extra bucks from dubs for various sounds.
Owner and engineer, Gary Exodus, tells The Sunday Gleaner that "we started out at 14 Dirk Avenue at my house. We started out as a private thing, but it got too big. We then moved to Mannings Hill Road, but due to an unfortunate incident there, we moved. We still use that as a private studio now. Currently, we are at Red Hills Road."
Exodus Studios was formed from the needs of the Exodus Sound System, for a private place to voice artists. Word eventually got out about the fine technical capabilities of the studios and artists were clamouring to be voiced there, with other sound systems wanting dubs done by these artists.
Gary Exodus explains that "We started from the sound system. My father owned the sound and he was part of the management of Exodus Night Club at Northside Plaza. Exodus was the spot to be at those times. After the club closed, he built a mobile sound, and then we built a studio."
Building dubs has been so successful that they have had no need to go into production. In the last 10 years, Exodus has built a name for itself on the international level, supplying dubs for all the sounds that have entered the World Clash series, as well as working with many sound systems from across the world. This includes satisfying requests from sounds in Japan, Germany, the United States, and other countries.
Popular artists to have voiced there include Beenie Man, Vybz Kartel, Cham, Sizzla, Bounty Killer, and the many whose posters fill the walls of the small, but effective studios. According to Gary Exodus, any artiste is welcome to voice dubs, as well as any sound system that wants a special.
And while dubplates are the main business, those who run Exodus Studios have also gone into the business of creating rhythms, preferring to bring back the old with a little flavour of today's dancehall.

Metro Media Sound System started out in the dancehall and Reggae industry in 1974. It was first owned by Lou Gooden, but when he migrated from Jamaica in 1976, Jimmy Metro take over ownership. The sound was first played/selected by Peter Metro. He was later joined by the current selector big belly Sky Juice a former selector of Black Zodiac. Still a major player in the sound system business, Metro has toured countries such as Canada (1988), Japan (1989), and England (1984,89,1990).
In the 1990s hardcore dancehall fans flocked venues like House Of Leo to hear Metromedia Sound System throw down the latest hit songs through resident selector Sky Juice and deejay Peter Metro. As a new generation of 'sounds' emerged, 'Metro' has taken a back seat but owner Haldaine “Jimmy Metro” James says they are still in the game.
“People need to know we are still around. We still have our fans but we want a younger generation to know we are not playing old people music,” he told the Jamaica Observer.
Many fans identify Metromedia with veteran selectors Dalton “Sky Juice” Bogle and Oliver “DJ Oliver” Alvaranga. But James points out that they are complemented by young turks like Charlie General, Hotta Blaxx, DJ Mafi and Papa Scully.
“We play the hottest artists out there, is not jus' songs from the '80s and '90s. There is something for everybody who come to a Metromedia dance,” he said.
Artists such as Josey Wales, Sister Verna, and Sister Katy toured Europe with this Veteran Sound System in 1984.
Metro was and is still a champion in the clash world. It is well known for its unique dubplates and selecting styles.
After playing one of Bounty Killer's Dubplates in a dancehall session, reports are that this is what led to his (buss) break into the dancehall and reggae music business in the 1990s. 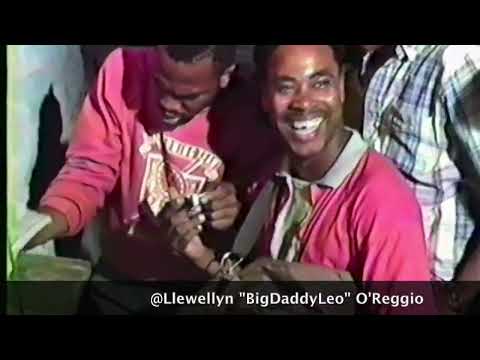 @Llewellyn "BigDaddyLeo" O'Reggio - Video Library Facebook: facebook.com/everoreggio I found a VHS copy of this dance I filmed in the early ...