The Marcos administration demonstrated its commitment to pursue transparency in natural resource governance by rejoining the Extractive Industries Transparency Initiative (EITI) and enabling the continued development of the mining sector.

In a letter to EITI Chair and former New Zealand Prime Minister Helen Clark, Finance Secretary Benjamin Diokno cited the value of good governance and anti-corruption measures in maximizing the extractive sector’s contribution to resource mobilization and sustainable economic growth. EITI will complement the administration’s agenda on transparency and accountability.

“We welcome the opportunity to re-engage in EITI. We also commend the progress of the EITI Board in reviewing the validation standard and making it more relevant to implementing countries. We believe that EITI is an important tool for resource-rich countries like the Philippines to improve transparency and increase accountability in the management and governance of the extractive industries,” said Diokno.

Diokno said other government agencies, as well as industry and civil society stakeholders who have been actively implementing EITI in the country, are supportive of the move to rejoin the global initiative.

On June 20, the Philippines through the Department of Finance (DOF) withdrew its participation in the EITI over concerns on metrics and procedures used for assessing country compliance with the international organization’s transparency requirements.

In an August 23 letter, Clark invited Diokno to re-state the country’s commitment to the EITI on behalf of the Marcos administration and build on the progress that the Philippines has achieved in the past nine years.

The PH-EITI multi-stakeholder group is chaired by the DOF and is composed of representatives from government, industry, and civil society.

Annual disclosure of contracts, financial, economic, social and environmental data is mandatory for extractive industries pursuant to the Department of Environment and Natural Resources (DENR) Department Administrative Order (DAO) No. 2017-07.

The PH-EITI has produced seven country reports, covering data from mining, oil, gas, and coal industries and reconciling over P362.5 billion in government revenues from extractive projects from 2012 to 2019.

In 2017, the Philippines was recognized by the EITI as the first among 50 plus countries in the world to have fully complied with the 2016 EITI Standard. The EITI updates its standard every three years and subjects member countries to validation to ascertain their compliance.

Diokno said that the Marcos administration is committed to engage and unite various stakeholders in pursuing good governance and policy reforms in the country.

Diokno has deemed it necessary to retain the 70 percent on-site and 30 percent WFH arrangement, pursuant to FIRB Resolution No. 017-22, until the FIRB conclusively decides on Philippine Economic Zone Authority’s request to extend the WFH setup.

“Considering the September 12, 2022 expiration of the resolution, it is just fair that we extend the WFH arrangement for IT-BPM companies until we finalize a resolution addressing the issue,” said Diokno.

According to Finance Undersecretary Antonette Tionko, the topic on the WFH extension request of PEZA is already included in the list of agenda items for the next FIRB meeting which is set on September 15.

“Given the long-standing issue on the WFH extension for the IT-BPM sector, we hope the decision of the Board will finally bring clarity to the matter,” said Tionko, who also serves as the chairperson of the FIRB Technical Committee.

“We listen to our stakeholders and see the WFH arrangement to be the new business model of most of the registered business enterprises. Hence, the discussion on this matter in the next FIRB meeting requires a more permanent measure from the inter-agency body,” she added. DOF Communications Division 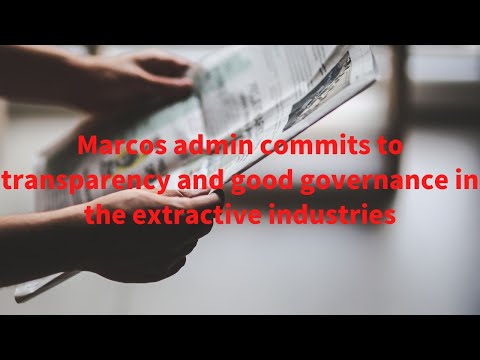 Marcos admin commits to transparency and good governance in the extractive industries The Marcos administration demonstrated its commitment to pursue ...