admin
The first 1,000 people to use this link will get a 1 month free trial of Skillshare: https://skl.sh/disasterbreakdown11211

If you found this video to be interesting, be sure to subscribe as there is a new video every Saturday. This video also went out to my Patrons on Patreon 48 hours before going out publicly. Consider joining here from £3 per month: https://www.patreon.com/DisasterBreakdown

There will never be another airport quite like the one which served the Asian Metropolis of Hong Kong in the years leading up to 1998. Hong Kong’s old Kai Tak airport is iconic among aviation enthusiasts but was eventually closed due to rampant noise and air pollution and the large amount of land which it occupied right in the center of town.
What made this airport so unique was the very interesting approach path that aircraft would take for landing on Runway 13. Planes were guided towards a large hill and with just a few hundred feet of altitude would make a large banking turn over a densely populated area just seconds before touching down.
You see, planes couldn’t make a straight in approach due to terrain limitations and there was not a whole lot of flat space to put an airport here as it was already built on partially reclaimed land. That steep turn on short final was made over the densely populated area of Kowloon. Hong Kong in the latter half of the 20th century became an economic powerhouse making Kai Tak one of the busiest airports in the world, in fact it once held the accolades of being the busiest airport in the world for Cargo Transportation and the Busiest Airport in the world with the use of a single runway.
The large iconic planes of the 20th century, 747s, Dc10s, L1011s and Concordes were commonplace at the airport, and all made that same approach. As you would expect, the infamous IGS13 approach was a challenging one, it was one that pilots had to have specific training to perform. This led to some complications but despite this, no fatal accidents ever occurred in relation to this approach at Kai Tak. Though one plane crashed in 1988 on the reciprocal runway, no crash had occurred on the unconventional approach. Except, one time.
On the 4th of November 1993, a China Airlines Boeing 747 crashed at Kai Tak. In this video we will break down the timeline of events which lead to this incident and take a closer look at the airport and its infamous approach flight path. 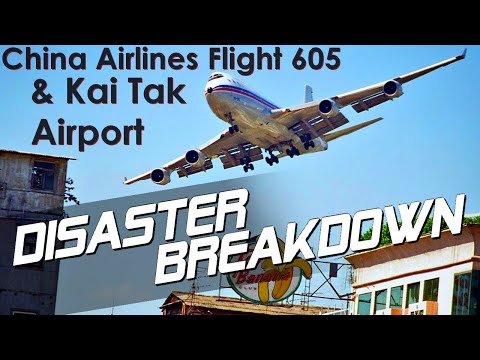 The first 1,000 people to use this link will get a 1 month free trial of Skillshare: https://skl.sh/disasterbreakdown11211 If you found this video to ...