A border layout lays out a container, arranging and resizing its components to fit in five regions: north, south, east, west, and center. Each region may contain no more than one component, and is identified by a corresponding constant: NORTH, SOUTH, EAST, WEST, and CENTER. When adding a component to a container with a border layout, use one of these five constants,
In addition, BorderLayout supports the relative positioning constants, PAGE_START, PAGE_END, LINE_START, and LINE_END. In a container whose ComponentOrientation is set to ComponentOrientation.LEFT_TO_RIGHT, these constants map to NORTH, SOUTH, WEST, and EAST, respectively.For compatibility with previous releases, BorderLayout also includes the relative positioning constants BEFORE_FIRST_LINE, AFTER_LAST_LINE, BEFORE_LINE_BEGINS and AFTER_LINE_ENDS. These are equivalent to PAGE_START, PAGE_END, LINE_START and LINE_END respectively. For consistency with the relative positioning constants used by other components, the latter constants are preferred.Mixing both absolute and relative positioning constants can lead to unpredicable results. If you use both types, the relative constants will take precedence. For example, if you add components using both the NORTH and PAGE_START constants in a container whose orientation is LEFT_TO_RIGHT, only the PAGE_START will be layed out.NOTE: Currently (in the Java 2 platform v1.2), BorderLayout does not support vertical orientations. The isVertical setting on the container's ComponentOrientation is not respected.The components are laid out according to their preferred sizes and the constraints of the container's size. The NORTH and SOUTH components may be stretched horizontally; the EAST and WEST components may be stretched vertically; the CENTER component may stretch both horizontally and vertically to fill any space left over.Here is an example of five buttons in an applet laid out using the BorderLayout layout manager:


How to Use BorderLayoutNote: This lesson covers writing layout code by hand, which can be challenging. If you are not interested in learning all the details of layout management, you might prefer to use the GroupLayout layout manager combined with a builder tool to lay out your GUI. One such builder tool is the NetBeans IDE. Otherwise, if you want to code by hand and do not want to use GroupLayout, then GridBagLayout is recommended as the next most flexible and powerful layout manager. 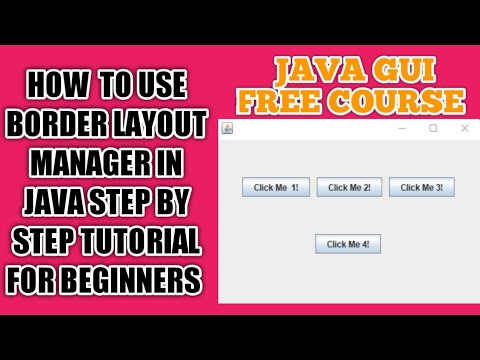