Founder and president Al-Ansar Foundation, Dr. Mohammed Kyari Dikwa has harped on the importance of good governance in Nigeria.

He made this known at the Cambridge International Symposium on Economic Crime organized by the Jesus College University of Cambridge, the United Kingdom held on 4th September 2022.

In a paper delivered, Dr. Dikwa stated the pivotal role of good governance in the development of any society.
He enumerated attributes of good governance to include: participation, rule of law, transparency, responsiveness, accountability, effectiveness, equity, and inclusiveness among others.

Continuing, Dr. Dikwa noted that "a nation or country without governance is like a train without a track, adding that
no matter how much potential that country has, it will never undergo
the tangible transformation needed to get to where it wants because it has
nothing directing its progress."
He also tasked the media to use their profession in promoting good governance in Nigeria.
"There seems to be increasing recognition of the
media’s role in governance in the development community. There are
also some indicators that media are being more recognized by the
policy-makers as having a central role in development. The role of the
media in promoting Good Governance is obvious."
The Concept of Governance and Financial Management

On the Concept of Governance and Financial Management, the former permanent Secretary, of the Federal Ministry of Finance said:

"Governance is seen as how power is exercised in the management of a country’s economic and social resources for development. It is the use of political authority and exercise of control over society, and the management of its resources for socio-economic development. Governance, therefore, involves the use of political authority to promote and enhance societal values-economic, as well as non-economic-that, that are sought by individuals and groups.

It is the process whereby the values of society, at different levels, are realized. Tanzi (1999) in Onuorah and Appah (2012) noted that good governance is an essential part of a framework for economic and financial management which includes: macroeconomic stability; commitment to social and economic equity; and the promotion of efficient institutions through structural reforms such as trade liberalization and domestic deregulation.

Poor governance may result from factors such as incompetence, ignorance, lack of effective institutions, the pursuit of economically inefficient ideologies, or misguided economic models. It is often linked to corruption and rent-seeking. Good governance, therefore, depends on the extent to which government is perceived and accepted as legitimate, committed to improving the public welfare, responsive to the needs of its citizens, competent to assure law and order and deliver public services and create an enabling policy environment for productive activities and equitable in its conduct.

This notion of good governance is congruent with the United Nations Commission for Human Rights, where governance is seen as the process whereby public institutions conduct public affairs, manage public resources and guarantee the realization of human rights, accomplishing it in a manner essentially free of abuse and corruption, and with due regard to the rule of law (UNDP, 1994). It is important to note that the concept is broader in scope than the government.

While government deals with the allocation of values by the state, governance presupposes that values are defended by structures other than the government or the state. Another dimension of governance worth considering is the normative dimension."
Furthering, Dr. Dikwa gave bad leadership, lack of strong institutions, non-compliance to due process, inadequate citizenship education, ineffective non-governmental organizations, and poorly motivated workforce among others, as some of the challenges to realizing good governance and new PFM Reform in Nigeria."

He stressed the role of civil society organizations In promoting good governance In Nigeria. According to him:

There are also little or no restrictions on the holding of public meetings. Additionally, some recent statutes enhance civil society engagement or participation in the anti-corruption crusade in the country. For instance, before the enactment of the Fiscal Responsibility Act 2007, the budgetary process in the country was nonparticipatory and secretive. 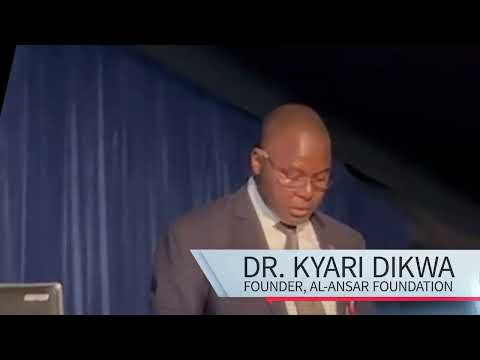