admin
Reviewing and Redefining Relationships: Modern Treaty Implementation in Yukon
Modern treaties are among the most important legal and constitutional documents in Indigenous affairs in Canada. The treaties created transformative societal change across the North and significantly altered the concepts and understanding of governance. However, the approach taken to implement these foundational agreements over the past forty-five years has resulted in strained relations between Indigenous signatories and their government partners. The Yukon has been looked to as a success story for the historical achievement of negotiating the Umbrella Final Agreement and eleven individual First Nation Final and Self-Government Agreements. Drawing on the first-hand experiences of Champagne and Aishihik First Nations, Tr’ondëk Hwëch’in and Vuntut Gwitchin Government, the purpose of this study was to examine how the partners in the negotiation of modern treaties have managed the transition from negotiation to implementation and what this transition may reveal about the modern treaty process in Canada.

About the speaker:
Dr. Rhiannon Klein was born and raised in Edmonton, AB on Treaty 6 Territory and the homeland of the Métis. She has been living on the traditional territory of the Kwanlin Dün First Nation and the Ta’an Kwäch’än Council in Whitehorse, YT since 2010. Rhiannon is currently the Chair of the Indigenous Governance Degree and a faculty member at Yukon University. This past March, Rhiannon completed her PhD in Public Policy at the University of Saskatchewan. Her dissertation is titled, “Reviewing and Redefining Relationships: Intergovernmental Relations and Modern Treaty Implementation in Yukon, 1986-2016.” Her teaching and research interests include public policy; Northern, Indigenous and multilevel governance; modern treaty negotiations and implementation; Indigenous-government relations; intergovernmental relations; community-based research; and Canadian politics. 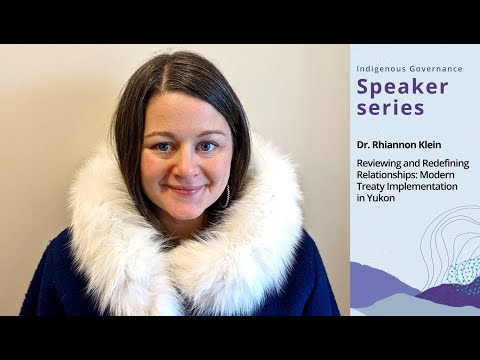 Reviewing and Redefining Relationships: Modern Treaty Implementation in Yukon Modern treaties are among the most important legal and constitutional do...