In a time where climate change is a hot topic, and countries all over the world are working to decrease C02emissions, many of Canada's Northern and remote Indigenous communities are still relying heavily on coal for energy. The high cost of energy, infrastructure challenges, and the harsh climate indicates that Canada's North is facing an energy crisis. Technology innovations in power generation may offer potential solutions to the energy crisis in Canada's North, but at what cost? SMRs are an emerging technology in the energy sector and recently Canada released its SMR action plan, aimed at SMR implementation. SMR’s appear to be a real contender in the energy industry as an alternative energy system to reduce carbon emissions. And while SMR’s may seem like an ideal solution to combat the rising emissions while providing energy solutions to the challenges identified by Northern communities, the question remains on to how to successfully incorporate SMR technology into the current energy mix.

About the speaker:
Dazawray Landrie-Parker (Métis) is a PhD Candidate in Public Policy at the University of Saskatchewan (U of S) and an instructor at Yukon University. She is also the former Director of Operations for the Métis Nation-Saskatchewan. In 2014, Dazawray was appointed as a member of the Royal Canadian Mounted Police Commanding Officer’s Aboriginal Advisory Committee for “F” Division (RCMP COAAC), which builds on her extensive background working with Métis Nation-Saskatchewan (MNS) where she held several senior positions - including Director of Operations, Director of Intergovernmental Affairs and Senior Policy Analyst.

Dazawray’s Métis ancestry fueled her focus on Indigenous communities and inspired her undergraduate degree in Native Studies from the U of S. and her subsequent degree-Master of Governance and Entrepreneurship in Northern and Indigenous Areas offered jointly by University of Tromsø-The Arctic University of Norway and the U of S. As the culmination of her program, Dazawray researched and built a community engagement framework for nuclear energy engagement in northern communities and the Policy for Public Engagement for the City of Saskatoon. 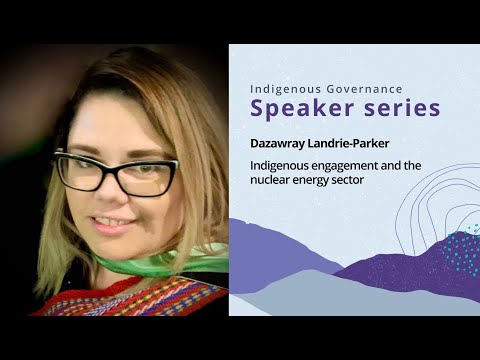 Dazawray Landrie-Parker Indigenous engagement and the nuclear energy sector In a time where climate change is a hot topic, and countries all over the ...