admin
HOUSTON - Dusty Baker is too cool to be seen as grandfatherly, even at 72 years old. After all, how many grandpas do you know sip beer from their nasty shoes as the kids hoop and holler around him?

But it’s that grandfatherly touch that has nurtured and lifted a group of men at a time when they’ve needed it most. Baker has loved on his Astros, protected them, defended them, hugged on them.

He has ushered them into the postseason yet again, carrying his dreams with their own. The Astros are in search of their second World Series title in four years. Baker’s drought has been 10 times that long.

He has been chasing his second title since 1981, the year he and Fernando Valenzuela’s Dodgers won it all. Johnnie B Baker was already in the 14th season of his 19-year playing career when he helped the Dodgers win the 1981 title.

He played five more seasons after that, finishing on an Oakland A’s team managed by Tony La Russa, the man now leading the White Sox team in the best-of-five Division Series. La Russa, 77, is the only manager in the majors older than Baker.

They’re friendly once bitter rivals, but rivals nonetheless. La Russa made history this year by becoming the first manager in baseball history to win a division title in five consecutive decades.

Baker made history by becoming the first manager to win division titles with five different teams. They’re both old school, literally and figuratively, but their management styles are different.

Baker’s style is what the Astros needed most in the aftermath of the cheating scandal that prompted MLB commissioner Rob Manfred to suspend manager AJ Hinch and general manager Jeff Luhnow. 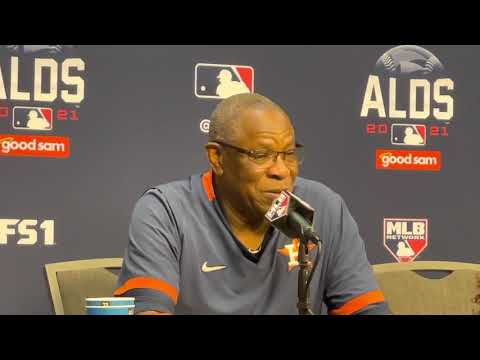 HOUSTON - Dusty Baker is too cool to be seen as grandfatherly, even at 72 years old. After all, how many grandpas do you know sip beer from their nast...