admin
Google employees are asking for more pay to match the rise in inflation. The company has announced it won't comply. CNBC's TechCheck anchors discuss what it means for internal and external Google employees. Sign up and learn more about the CNBC Investing Club with Jim Cramer https://cnb.cx/3Ei22n4

Google executives are acknowledging employee concerns about rising inflation, but say they have no plans to respond with a companywide pay increase.

The topic of workforce pay was addressed at a special meeting on Tuesday that was intended to focus on Google’s 2022 strategy.

Ahead of Google’s all-hands meetings, now conducted virtually, executives determine some of what they will discuss based on questions that are submitted to an internal forum called Dory. With more than 400 “upvotes,” a question related to inflation costs and employee pay received enough interest among the workforce to garner attention.

CNBC obtained audio of the meeting and viewed a copy of the inflation question, which Alphabet CEO Sundar Pichai read aloud.

“With the U.S. inflation rates being as high has 7%, some companies are doing blanket salary adjustment to cover just the inflation,” Pichai said. “Is there any plans for Google to do the same thing?”

Pichai then gave the floor to Frank Wagner, Google’s vice president of compensation. Wagner opened by saying that he recognizes the significance of inflation and compensation concerns among the company’s workers.

“Inflation does seem to be atop of mind for a lot of folks, and I think one of the reasons is that people are pretty eager to get their compensation awards,” Wagner said.

He said company leadership would be releasing letters to managers this week so employees will learn their compensation awards for the next year.

However, he went on to say that while Google is trying to pay competitively, it won’t introduce companywide adjustments for inflation.

“As I mentioned previously in other meetings, when we see price inflation increasing, we also see increases in the cost of labor or market pay rate,” Wagner said. “Those have been higher than in the recent past and our compensation budgets have reflected that.”

Wagner then said that should pay rates go up, Google doesn’t want to give “smaller increments to everybody” but instead “we want to adjust it and pay it by performance.”

“We don’t have any plans to do any type of across-the-board type adjustment,” he said.

In a statement, a company spokesperson echoed Wagner’s comments about Google increasing pay based on performance and said that worker pay doesn’t just come from salaries.

“Employees receive bonus and equity as part of their total compensation, which also includes generous benefits and flexibility,” the spokesperson said.

Google’s comments are a telling indicator of its priorities at a time when the so-called “Great Resignation” is leading workers across the country to leave their jobs in hope of better pay, a different location or a new and exciting challenge.

Google is an outlier

Some 4.2 million people quit their job in October, according to the Labor Department, down from a record 4.4 million in September. Meanwhile, inflation topped 6% in October, the highest since 1990, meaning consumers across the country are paying more for gas and groceries.

The battle for tech talent is particularly intense as the Covid-19 pandemic has turned remote and flexible work into a benefit that many office workers now expect in the future.

While Google recently delayed its January return-to-office plans amid ongoing concerns about the coronavirus, the company is an outlier in requiring employees to come back to physical offices three days a week. Salesforce is allowing for permanent remote work, and co-CEO Marc Benioff has said he expects 50% to 60% of employees to work from home even after the pandemic. 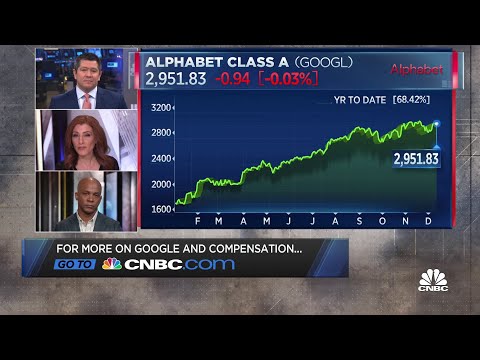 Google employees are asking for more pay to match the rise in inflation. The company has announced it won't comply. CNBC's TechCheck anchors discuss w...