admin
As international negotiations continue over Iran’s nuclear program---it appears that the Islamic Republic is preparing for a space launch. While some are calling it posturing, Iran state media says---it’s simply a part of an ongoing effort to put satellites into orbit. RT America’s Alex Mihailovich has the story. (1:02) Then, former Pentagon official Michael Maloof and Professor at University of Tehran Mohammad Marandi share their perspectives. (4:09) It’s been a very difficult weekend for many Americans caught in some of the most powerful tornadoes across Kentucky and other states. More than 100 people may have been killed—as tornadoes toppled buildings—trapping people inside. Now thousands today are waking up without power. Officials calling it devastation we have never seen. RT America’s Trinity Chavez has the story. (13:28) Dr. Joshua Durkee, Professor of Meteorology at Western Kentucky University joins In Question to explain. (16:17)

Check out our other shows!

NO show does it like this. It’s TIME for The News on RT America: https://bit.ly/NRSSHOW

It’s her take on all things political and she presents ALL the angles: News.Views.Hughes with Scottie Nell Hughes, NVH: https://bit.ly/NVHSHOW

What’s your NEWS IQ? Give us 30 minutes, and we’ll take you across the globe! In Question with Manila Chan, IQ: https://bit.ly/IQ_SHOW

Steve Malzberg sinks his teeth into the slander, hypocrisy, bias and lies of MSM. MMM…Delicious! Eat The Press: http://bit.ly/EatThePress

Candid conversations with the most outspoken guy in Hollywood! Dennis Miller + One!
Dennis Miller Plus One: http://bit.ly/DennisMillerPlusOne

Let our TV time-machine bring you the week’s highlights and a closer look at the BIGGEST stories, Just Press Play: http://bit.ly/JustPressPlayShow


Author and social critic Chris Hedges conducts fascinating in-depth interviews with the fiercest critics of the establishment. Watch all episodes at https://bit.ly/2QIkQZg

Yep, it’s Gov. Jesse Ventura and you’re living in his WORLD! Come along for the ride.
The World According To Jesse: http://bit.ly/WATJSHOW

They’re watching you. Are you watching them? Are you WATCHING THE HAWKS?
Watching The Hawks: http://bit.ly/WTHSHOW

Follow the twists and turns of the global economy with Boom Bust, the one business show you can’t afford to miss. Boom Bust: http://bit.ly/BoomBustShow

Do you keep missing the forest for the trees? Let Holland Cooke show you the Big Picture, The Big Picture: http://bit.ly/TheBigPictureShow 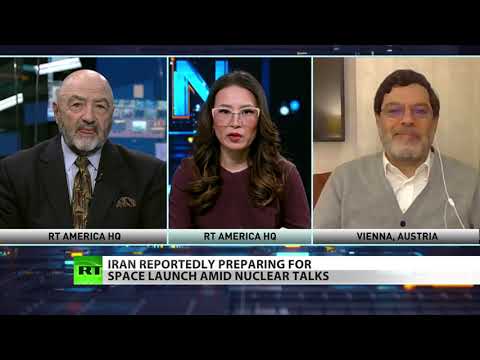 As international negotiations continue over Iran’s nuclear program---it appears that the Islamic Republic is preparing for a space launch. While some ...