admin
Soda Story - Brewing Tycoon continues and we craft a few soda mixtures in order to pick some fancy new effects! Some of the effects are useful, such as the ability to move quickly or become magnetic, whereas others have less helpful, more explodey, effects...

We turn our attention to that pesky treasure chest that we failed to open last time and, thanks to some of our wonderful new soda creations and a little bit of trial and error, we're able to get the thing open! Hurrah!

Our next mission sees us being followed around by the Prisoneers camera guy again, which is a little bit irritating as he keeps shouting nonsense at him, but by and large we ignore him and go about our day. We set up some more brewing machines over at Scoops' old place, we try to use our research points to unlock Soda Master and we use our drones quite a bit.

Also we are contacted by the fanclub of The Sandwiz and it turns out that his disappearance is somewhat suspicious and all is not as it seems in the world of Prisoneers...

Join the channel to get access to get fancy-pants member-only perks!
https://www.youtube.com/channel/UCqCa31-K_PjmEty8WX3whyw/join

If you’d like to connect with me, you can find me on...

Soda Story - Brewing Tycoon is an adventurous casual management game in which you take on the challenge of running a Soda brewing operation. All while participating in the current season of the hit reality TV show “Prisoneers.”

You play a prisoner, selected at the very last minute to take a role in a competition that’s famously stacked full of rivalries. Everyone is trying to become the best of the best. With fame, fortune, and time off of prison sentences up for grabs - you bet it’s going to be a fierce battle!

Master the art of brewing Soda by experimenting with hundreds of different flavors and combinations. Will your new recipe become a big hit with the fans, or will it end up causing revolting side effects to anyone that dares to take a sip?

Automate your operation with Soda Brewers, SodaBots, Flavor Analyzers, and more. There’s a multitude of unusual machinery and inventions to research, build, and use to your advantage.

Explore your Warehouse, your rival Warehouses, and the surrounding Compound - What secrets might you discover? What tricks can you play to gain an advantage?

Relish in the challenges standing in the way of you taking the champion’s crown. With four different and intriguing rivals, it’s all about keeping ahead of the competition. Or, if you’d prefer, infiltrating their operations for a teensy-tiny amount of sabotage. Watch your back, revenge is a top priority for some of these oddball misfits.

Channel graphics designed by Penge in The Geek Cupboard. 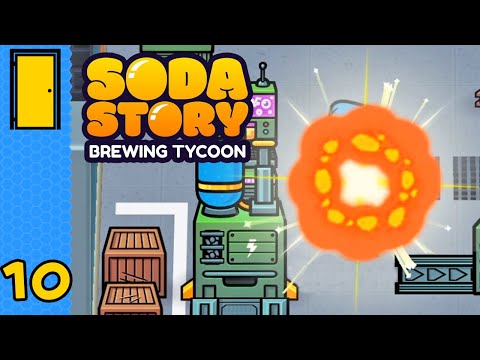 Soda Story - Brewing Tycoon continues and we craft a few soda mixtures in order to pick some fancy new effects! Some of the effects are useful, such a...