Saurabh Kayasth was born on 8th of February 1997 at Jhagadia. His father Mr. Kumudchandra Kayasth is a driver by profession and mother Mrs. Jayshreeben is a housmaker. He is the only brother to 3 sisters. He spent his childhood in a joint family. He is happily married to Ms. Pooja Vibhandik since 30th May 2018.

Saurabh has done his graduation in English Literature from J.P. College, Bharuch affiliated to VNSGU, Surat.

He has also done Post Graduate Diploma in a subject with his area of interest, 'Corporate Social Responsibility' from Faculty of Social Work, M.S University of Baroda.

Saurabh is working with one of the prestigious organizations, 'Bharuch District Management Association' as Senior Executive.

Saurabh has immense interest in human psychology and has worked with Professional counselor also. Thus, he could help a number of friends to relieve from depression & anxiety.

Saurabh feels proud to have learnt 'values' like integrity, dedication and morality from his parents !

Few of his core interpersonal skills include... ...

Saurabh is a born leader. He developed keen interest in 'Leadership', thanks to his rebellious nature.

During his Journey in NSS, He has attended as many as 6 camps including College, District and state level as well

A sudden opportunity grabbed unknowingly became most effective factor of his career.

When he came to know about the Rotaract in Jan. 2016, he immediately took the initiative and chartered the club in February 2016..

His journey began as a Charter President of Rotaract Club of Narmada Nagari which is sponsored by Rotary Club of Bharuch Narmada Nagari. He got 5 awards and/or recognitions in the very first year.

In his second year, he got an opportunity to serve as District Sergeant-at-Arms for 2017-18

Currently, he is on advisory role as 'Past President' along with being 'Special Task Force'.

Saurabh has made a good reputation of his skills in whole District 3060.

He is a young, enthusiastic and 'committeed to betterment' kind of leader ! 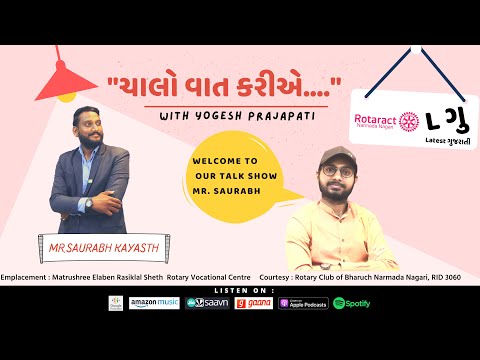