Shares of Twitter were down about half a percent before noon on Monday.

Dorsey, 45, was serving as both the CEO of Twitter and Square, his digital payments company. Dorsey will remain a member of the board until his term expires at the 2022 meeting of stockholders, the company said. Salesforce President and COO Bret Taylor will become the chairman of the board, succeeding Patrick Pichette, a former Google executive, who will remain on the board as chair of the audit committee.

“I’ve decided to leave Twitter because I believe the company is ready to move on from its founders,” Dorsey said in a statement, though he didn’t provide any additional detail on why he decided to resign.

Agrawal will have to meet Twitter’s aggressive internal goals. The company said earlier this year it aims to have 315 million monetizable daily active users by the end of 2023 and to at least double its annual revenue in that year.

Agrawal, who’s served as CTO since 2017, has been with Twitter for more than a decade. He had been in charge of strategy involving artificial intelligence and machine learning and he led projects to make tweets in users’ timelines more relevant to them.

Agrawal was also previously tasked with finding a leader for Project Bluesky, a research project Twitter launched to establish open and decentralized standards for social media platforms. Dorsey had previously said Bluesky will help social media companies collaborate on how posts are promoted to users and will give users more control over the content they see. Bluesky could also make it easier for the social networks to enforce restrictions against hate speech and other abuse, essentially helping them share the load at a lower cost.

Dorsey said in an email he published on Twitter that Agrawal has been his choice to lead the company “for some time given how deeply he understands the company and its needs.”

Dorsey was nearly ousted last year when Twitter stakeholder Elliott Management had sought to replace him. Elliott Management founder and billionaire investor Paul Singer had wondered whether Dorsey should run both of the public companies. Singer called for Dorsey to step down as CEO of one of them before the investment firm reached a deal with Twitter’s management.

Elliott issued a statement on Monday’s news, noting that its collaboration with Jack and Twitter over the past couple of years has been productive.

“Twitter is now executing against an ambitious multi-year plan to dramatically increase the company’s reach and value, and we look forward to the next chapter of Twitter’s story,” the company’s managing partner Jesse Cohn and senior portfolio manager Marc Steinberg said. “Having gotten to know both incoming Chairman Bret Taylor and incoming CEO Parag Agrawal, we are confident that they are the right leaders for Twitter at this pivotal moment for the company.”

Dorsey, who co-founded the social media giant in 2006, served as CEO until 2008 before being pushed out of the role. He returned to lead Twitter in 2015 after former CEO Dick Costolo stepped down. 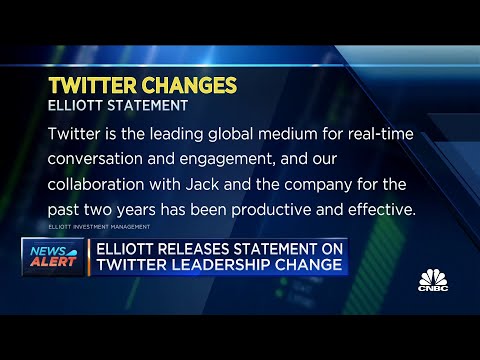