Economic entanglement and systemic rivalry: Germany and China at a crossroads | DW Analysis

admin
China is Germany's biggest trading partner. Almost 1 in 3 shipping containers in the German city of Hamburg is either heading to China, or coming in from a Chinese port. In Hamburg the ties are so strong that a shipping line owned by China's government even bought a stake in this terminal.
This is a story of how Germany pumped up its economy on business with China and how it got closer than any other western power to the leaders in Beijing. Only to wonder if all of this is a good idea. Under president Xi Jinping, China has become a darker dictatorship, one that's challenging the power and values of the West. China is not only developing, but also bit by bit exporting an authoritarian regime that is antagonistic against our belief in democracy and human rights. The US is lining up the West to take a stand for democracy in a battle of the systems that will define this century. Many want Germany to join. There's going to be pressure from within the German population, from Germany's major allies outside of Europe, pushing Germany towards a harder line.
But is Germany really prepared to risk all this in a showdown with China? Germany's new government faces a choice - a dilemma. Should it keep following the money? Or does it need to think again? In this video we're going to find out how Germany got so entangled with China, how the last few years have shown what it is they're really dealing with. And we'll examine whether the new team running Germany really wants to make a new start.

Economic entanglement and systemic rivalry: Germany and China at a crossroads | DW Analysis 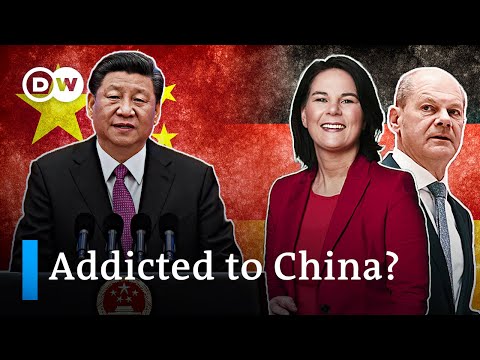 China is Germany's biggest trading partner. Almost 1 in 3 shipping containers in the German city of Hamburg is either heading to China, or coming in f...