admin
Diagnosed with type 1 diabetes in 1946 at the age of 12, Dr. Richard K. Bernstein never set out to be a doctor. Not only that but according to statistics from the American Diabetes Association, he should have been long dead by now.

That he is very much alive and, in fact, in excellent health, can be attributed to two primary causes. The first is that he was originally trained as an engineer and attacked his disease as a problem to be solved and not a condition to be treated. The second is that he was fortunate enough to still be alive when the first blood glucose meters arrived on the scene.

In 1969, after following ADA guidelines for more than twenty years, Dr. Bernstein had many of the debilitating complications of the disease. Sick and tired of being at the mercy of his disease, he obtained one of the early blood glucose meters and became the first diabetic ever to monitor his own blood sugars. Dr. Bernstein used himself as a guinea pig and began testing his blood glucose throughout the day, hoping to discover what made it go up and down. After considerable trial and error, not to mention research, he discovered that he could normalise his blood glucose through diet, exercise and medication—and that he could help others do the same.

When the then-engineer Richard Bernstein tried to persuade the medical community that he had found the answer, the medical community roundly ignored him—even told him that it was impossible. So, in his mid-forties, he decided the leave his successful career in business and go to medical school.

These facts combined with Dr. Bernstein’s sheer determination to solve the problem of diabetes led to his revolutionary method of blood glucose normalisation, which he demonstrates in the groundbreaking, perennial bestselling book, Diabetes Solution.

Today, many thousands of patients and readers later, Dr. Bernstein continues to see and train patients, maintains a busy schedule that includes a monthly question-and-answer teleconference, and continues to refine his cutting edge program of blood glucose normalisation. He reaches more patients than he ever could have back when he first opened his practice—and slowly the standard of care has been changing to mirror his ideas.

Please consider supporting Low Carb Down Under via Patreon. A small monthly contribution will assist in the costs of filming and editing these presentations and will allow us to keep producing high quality content free from advertising. For further information visit; https://www.patreon.com/lowcarbdownunder 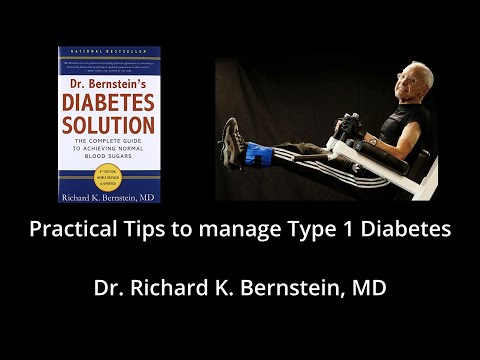 Diagnosed with type 1 diabetes in 1946 at the age of 12, Dr. Richard K. Bernstein never set out to be a doctor. Not only that but according to statist...