admin
Why Dafydd would be an effective mentor:

Over the last 20 years, Dafydd has been developing and expanding his farm and has created an efficient organic system which utilises grass, red and white clover to produce lamb and beef of the highest quality, with minimum cost of production, to premium markets.

He has developed an upland farming system with low labour requirement as a result of building and animal handling designs, technology, reduced inputs, and overall simple efficient methods
Dafydd’s farm was a development farm with Waitrose/IBERS, researching home-grown protein.

During the last five years the farm has become 100% protein sufficient Dafydd has more than twenty years’ experience in growing multi-species swards, which improved protein levels in swards and silage, animal performance, animal health and soil health. Beef cows and sheep are used as a grazing tool to achieve white clover persistence in the swards, grass utilisation, and quality, and natural weed control.

Over the last five years, the March lambing sheep flock, which has a 160% scanning percentage, has been reared with zero concentrates, relying on winter grass, red clover silage and quality spring grass. The has led to 30% of lambs been able to be sold fat in June. The Hereford cross beef cattle are mostly fattened on white and red clover swards at 18-25 months, achieving an average of 1.6kg daily liveweight gain at key periods.

Efficient muck storage and management to maximise nutrients and help maintain good water quality on the farm. Dafydd has made several changes on his farm in order to ensure clean water including fencing off river land, building bridges, making the most of winter pasture and establishing hard roads across the farm.

Dafydd has planted twenty thousand trees on the farm, in hedges and hilly areas, in order to create biodiversity, shade and maintain biosecurity.

He also carries out regular soil testing in order to make the most of his organic farm.
During recent years Dafydd has hosted open days for Farming Connect, National Sheep Association, Waitrose, IBERS, British Grassland Society, European Grassland Conference, a visit by Prince Charles, and visits by groups of farmers from Wales and beyond.

Dafydd can provide support on the new agricultural pollution regulations. 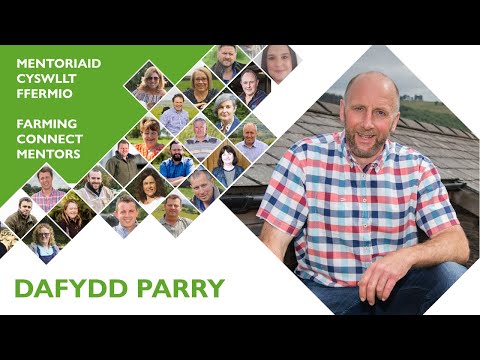 Why Dafydd would be an effective mentor: Over the last 20 years, Dafydd has been developing and expanding his farm and has created an efficient organi...