admin
The uproar over the disappearance of about 6 billion USD worth of deposits of more than 400,000 depositors in several village banks in Henan has lasted for more than two months, and depositors are still unable to take out their deposits. Thousands of Henan village bank victims from all over the country gathered in front of the People's Bank of China in Zhengzhou, Henan, in the early hours of July 10 to protest.
On July 11, in view of the pressure from various parties, the Henan Banking and Insurance Regulatory Bureau and the Henan Provincial Local Financial Supervision Bureau issued an announcement stating that the principal of the customers in four involved village banks will be advanced in batches.
On July 6, two village banks in Hebei announced their dissolution and whose business and property were acquired by Zhangjiakou Bank.
Recently, the Bank of Nanjing, which has total assets of 1.75 trillion yuan, has been in trouble again.
In addition, the debt crisis in the real estate industry has gradually spread to the financial industry.
Once the financial crisis breaks out in banks, people's deposits will disappear or cannot be withdrawn at will. The banks and the government collude with each other in the name of maintaining order, which has already led to public discontent. As more and more crises break out in the property market, local institutions, and eventually the entire financial system, it will surely shake the rule of the Chinese Communist Party.
#Financialcrisis #Bank #Money #ChinaBank
All rights reserved. 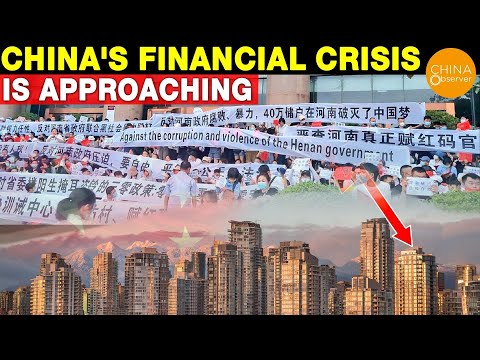 The uproar over the disappearance of about 6 billion USD worth of deposits of more than 400,000 depositors in several village banks in Henan has laste...