admin
It can take a long time for a bubble to burst.

Four years ago, in 2017, Grant's Interest Rate Observer, a highly regarded financial newsletter, wrote an article about the now infamous China Evergrande group. Back then, it was anything but a familiar name except in China and among some institutional investors.

The article was titled “Ever Higher” as Grant published a chart showing the extraordinary rise in China Evergrande's stock price on the Hong Kong exchange that spring.
Fast forward to 2021, and indeed, Evergrande, once the world’s most valuable property stock, has become famous as the world’s most heavily indebted property company. With an estimated $300 billion in debt, it also could become Asia's largest bankruptcy as China's government seems less and less likely to come to the rescue.

Why should the U.S. investors care? What if any significance does it have outside of China?
That is where financial thought leader, journalist/sleuth, and historian James Grant comes in.

Grant is the Founder and Editor of Grant’s Interest Rate Observer, a twice-monthly journal about all interest-sensitive investments which pretty much covers the waterfront. It is considered a must-read by professional investors, including at leading hedge funds, private equity, and investment firms.

I started the discussion with Evergrande: why it warranted Grant’s readers’ attention back in 2017 and what it represents now.

WEALTHTRACK #1814 broadcast on October 01, 2021
More Info: http://wealthtrack.com/beyond-evergrandes-fall-its-far-reaching-impact-with-influential-journalist-historian-james-grant/
Bookshelf:
Money of the Mind: Borrowing and Lending in America from the Civil War to Michael Milken
https://amzn.to/3AZV2th

John Adams: Party of One
https://amzn.to/3ip3hb9

Bagehot: The Life and Times of the Greatest Victorian
https://amzn.to/3ASPReN 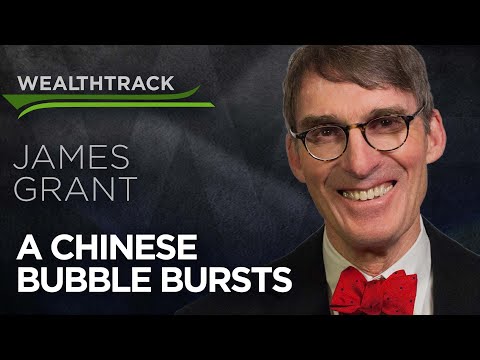 It can take a long time for a bubble to burst. Four years ago, in 2017, Grant's Interest Rate Observer, a highly regarded financial newsletter, wrote ...