admin
If you've not seen a Q&A before, this is easy. People send me questions, I answer them.

00:00 You have been made a producer for The Grand Tour (the new Top Gear), and are helping the guys choose tanks for a special. What would you recommend for each?
02:08 What are your thoughts on the Saracen and Saladin?
02:32 GOTM
05:15 Which was the tank you have enjoyed reviewing the most?
07:11 If the Netherlands would have been more up to standard at the beginning of WW2 whose tanks might they have bought?
08:01 How representative was the 1991 Gulf War of what may have happened in the late 1980s Fulda Gap?
11:19 Why have modern AFVs almost universally moved to a track system utilising return rollers?
12:38 What is your most favorite Swedish tank and why is it your favorite?
12:57 How do you decide what vehicle and which presently surviving example will be featured in a “ITCH” ? Have you ever had to scrap an episode that had progressed somewhere into production?
16:16 Stryker SHORAD vehicle only has four shots of Stinger and two of Hellfire is the expectation that a battalion or brigade will be attacked by only 6 aircraft at a time?
17:10 Korean M36s again.
17:34 What is your opinion on the M4A2E4 and why wasn't it fielded?
19:47 Is it easier to work with infantry as an organic or division/corps level asset, or is that a pointless distinction in actual combat?
21:50 Where do you draw the line between an MBT and a medium tank?
23:24 You've mentioned that the 75mm was found lacking in Normandy while previously in Italy it was seen as effective. What circumstances changed between Italy and Normandy which caused the 75mm to be less effective?
30:18 Is there any proof of enemy tank or gun features being basically copied by any nation?
31:42 Could you give us an update on the Mobile Protected Firepower Program?
32:06 Any funny, goofy, weird or memorable glitches in tank software you remember?
33:08 What can you tell us about tank destroyer doctrines outside the US Army?
36:45 Some modern AFVs have been designed without traditional direct optics, instead using cameras connected to monitors with either traditional wiring or fiber optics. Opinions?
39:04 Had Sherman Firefly been based off the bigger turret Sherman would it have been more effective, or should the commonwealth just adopted the 76mm?
40:34 I saw your last tank video with Ian and you mentioned the Soviet 115mm was never really developed like it could have been. Could you explain further?
42:18 Could there be a niche for a vehicle that's wheeled and armed with a primary armament much more geared towards infantry support for operation in urban terrain? Or does the modern tracked IFV cover that need already?
44:10 Has there ever been any research or testing conducted on the use of powerboat-styled hydraulic damping seats
45:05 Would appreciate if you could do an article on M113A1 with T50 turret and M113A1 with Scorpion turrets with 76mm guns.
46:28 Does the US army or the various other armies you trained with have a doctrine to deal with a mass technical assault?
47:01 Is the US considering putting the xm360e1 gun on the m1 Abrams?
48:05 Pick a better name than "Challenger 3"
50:10 What were the most useful/best changes/adaption in tank design you've come across to improve the quality of life inside a tank?
51:07 Why didn't NATO train for rapid train offloading?
52:00 In WW2, what weapons did infantry from the various nations have at their disposal to deal with tanks if the infantry didn't have supporting anti-tank guns or their own tanks?
55:08 Which nation had the best armoured doctrine pre WW2?
56:48 What is the difference between a tankette and a light tank/combat car?
58:13 Is it better to regun or rechamber a tank for logistics commonality?
59:44 Your opinion on the Russian "Filin Device"?
1:02:20 Can you explain the concept of "overmatching"?
1:04:15 In the movie Fury when both the Pak 40s and Tiger fire their shells have a distinct whistle as they pass. Is this accurate to reality?
1:04:41 Do you think we will have twin-cannon tanks?
1:05:46 What was the Chimera? I've only seen it in Wargame Airland/Red dragon.
1:06:40 Why do Japanese tanks look so different, when they will happily use US designs for ships and aircraft?
1:08:59 Are Cav Squadrons and CABs now interchangeable?
1:12:00 Couldn't German planners and officers forsee the problems with Panthers and Tigers?
1:14:29 Has any General lived to see the tank named after him, if so, what did he think?
1:15:19 Would a battery/electric armored vehicle be better than a dino-powered one? 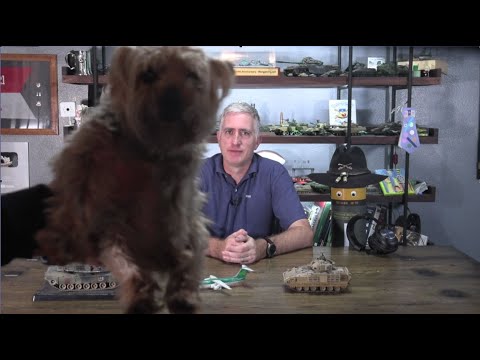 If you've not seen a Q&A before, this is easy. People send me questions, I answer them. T-Shirt sales: https://everpress.com/the-chieftain FB Page: ht...