admin
Changing Drivers for Inflation | Madhusudan Mohanty | Misra Centre for Financial Markets and Economy (MCFME)
Abstract:
We construct a balanced panel dataset for 47 advanced and emerging market economies over a sample period from 1996 to 2018 to empirically investigate possible changes in the driving forces of inflation. Using an open economy hybrid Phillips curve model of inflation and formally testing for structural breaks, we find relatively little significant change in the underlying driving forces or their quantitative effects for most economies, even after the Great Financial Crisis. However, one notable change has been an increase in the average weight on expected future inflation, measured using professional forecasts, for both advanced and emerging market economies. We find very heterogeneous but significant effects of inflation expectations, domestic and foreign output gaps, exchange rate pass through, and oil prices, with generally higher sensitivities to external driving forces for emerging market economies. Consistent with the model, the behavior of the various inflation drivers, especially what appear to be better anchored inflation expectations, can explain patterns of changes in the level and volatility of inflation across different economies. Keywords: open economy Phillips curve; structural breaks; inflation expectations; exchange rate passthrough; inflation volatility.

About the Speaker:
Mr. Madhusudan Mohanty is Adviser, Emerging Market Economies in the Monetary and Economic Department at BIS. Previously, he was the Head of Economics and Financial Markets for Asia & the Pacific in the BIS' Hong Kong Office and the Head of Emerging Markets and the Head of Macroeconomic Analysis in the Head Office in Basel. Prior to joining the BIS, he worked at the Reserve Bank of India's research department. Mr Mohanty was educated in India and the United Kingdom. 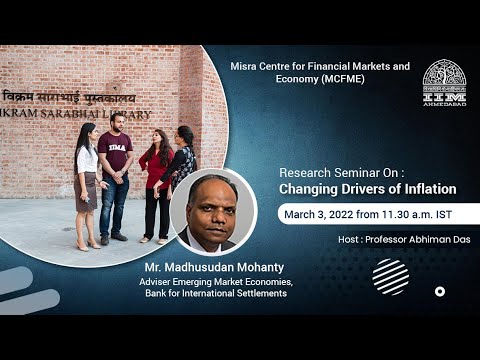