admin
The Elma Francois Institute for Research and Debate of Cipriani College of Labour and Co-operative Studies invites you to join us as we discuss the expectations of various stakeholders of the Budget Statement 2022.

Panel Bios
Antonia Tekah- De Freitas
Mrs. Tekah- De Freitas has been an educator for the past 34 years. She became the President of TTUTA in 2019, the first female President in the union's history. With a background in Human Resource Management and Government Studies, Mrs. Tekah-De Freitas believes that leaders should facilitate opportunities and promote actions that emphasise individual empowerment and development of human capital.
Mrs. Tekah- De Freitas has unhesitatingly advocated for the provision of quality education as a public good, provided by qualified education professionals. As the 3rd Vice President of the Caribbean Union of Teachers (CUT), she has represented local and regional education professionals at various Caribbean and international forums.


Conrad Enill
Mr. Enill is a Strategic Business Advisor on financial and energy analysis and strategic planning with a policy background at the organizational, national, and international levels
Served as Governor of both the International Monetary Fund and the World Bank, and as Chairman of the G24 sub-group of the IMF.
He has served the government and people of Trinidad and Tobago as Minister of Energy and Minister in the Ministry of Finance between 2001 and 2010.
He is also a Certified International Credit Union Development Educator (World Council of Credit Unions and is currently the Executive Chairman of Connill Consulting Limited and a Lecturer and Practicum Supervisor for the MBA Sustainable Energy Management Programme
Alongside these engagements, Mr. Enill serves as Chairman of the Board of Directors at The National Gas Company of Trinidad and Tobago Limited and several subsidiary companies within The NGC Group.

Gabriel Faria
Gabriel Faria has over 40 years' leadership experience in various companies and industries both locally, regionally, in North America, Europe and the Far East.
He has held Senior Executive roles in many well-established companies, in addition to serving on numerous boards. He is currently the Chief Executive Officer of Trinidad and Tobago Chamber of Industry and Commerce.
He is proud to have always grown the businesses that he has been responsible for, in market share, turnover and profit.
He holds a Master's in Business Administration in International Business and graduated in the top 10% of his class.
He believes work does not start or end once you enjoy what you do, and a leader’s role is to change the predictable outcome.

Dr. Vanus James
Dr. Vanus James is a former Senior Policy Advisor, UNDP, and World Intellectual Property Organization (WIPO) International Consultant.
He also served as Senior Research Fellow in the Scotiabank Chair in Entrepreneurship & Development and Adjunct Distinguished Professor of Economics / Econometrics, University of Technology, Jamaica.
Dr. James is the author of three WIPO reports measuring the contribution of copyright-based industries to Jamaica, Trinidad and Tobago, and the OECS as well as author of the UNECLAC manual “The Design and Conduct of Public Expenditure Reviews in Caribbean Countries”

Ozzi Warwick
Ozzi Warwick is currently the Chief Education & Research Officer and Executive Trustee of the Oilfields Workers' Trade Union (OWTU).
He is also the General Secretary of the Joint Trade Union Movement (JTUM) and the Movement for Social Justice (MSJ)
He is an elected member of the Financial Control Committee and Presidential Council of the World Federation of Trade Union and Secretary of the IndustriALL Global Union Caribbean Region.
He currently Chairs the Local Organizing Committee for the Assembly of Caribbean People. 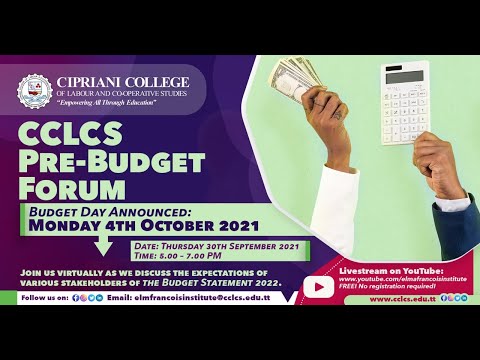 The Elma Francois Institute for Research and Debate of Cipriani College of Labour and Co-operative Studies invites you to join us as we discuss the ex...