admin
The debate around solar radiation modification has broadened in recent years, but there has not yet been significant progress on international mechanisms to govern it, says "Economist" senior editor Oliver Morton in this "C2GTalk." He adds: "I don't want a world with solar geoengineering come what may, but I also don't want future generations to look back and say, 'I wish they’d thought about this just a bit more thoroughly.'"

Oliver Morton previously worked at "Nature"  and  "Wired"  and contributed to a range of other publications, including "The New York Times" and "Science."  He is the author of multiple books, including "Mapping Mars: Science, Imagination and the Birth of a World" and 'The Planet Remade: How Geoengineering Could Change the World." Asteroid 10716 Olivermorton is named in his honor.

This interview was recorded on February 10, 2022 and will be available with interpretation into  中文,  Español,  and Français. For more, including an edited transcript, please go to C2G's website. 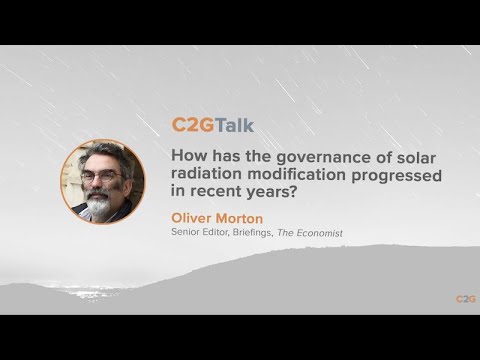 The debate around solar radiation modification has broadened in recent years, but there has not yet been significant progress on international mechani...