admin
An overnight explosion and ensuing fire in a Brooklyn home left six people injured and dozens of area residents forced out of their homes in the middle of the night, according to the FDNY.

Fire officials said a call reporting the explosion came in around midnight Wednesday at a private residence on Vermont Street, near the corner of Jamaica Avenue.

Firefighters arrived minutes later to find heavy flames in the basement of the private residence, as well as on the first and second floor of the three-story building, authorities said.

Officials said two occupants were home on an upper floor when the building was rocked by the explosion in the basement. Both were able to evacuate on their own, sustaining non-life-threatening injuries, authorities said.

The three-alarm fire sparked by the explosion spread to two buildings on either side of the home, as well as a separate building on Jamaica Avenue, behind the home, the FDNY said.

Over 138 firefighters from 33 units responded to battle the blaze, according to fire officials.

Con Edison also responded to the scene to mitigate a possible gas emergency.

A total of six patients were treated by EMS, with two of them being taken to a nearby hospital for further treatment, while the four others refused further medical attention, the FDNY said.

The details of the victims’ injuries and their conditions were not immediately known.

The explosion and fire left the structural stability of the entire block in question, which resulted in 54 area residents being displaced from their homes and forced out into the cold, officials said.

The FDNY said those displaced were receiving assistance from the American Red Cross and New York City Office of Emergency Management.

The cause of the explosion and subsequent fire were still under investigation early Wednesday morning, authorities said. 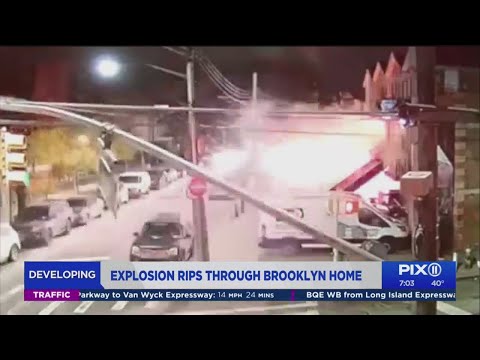 An overnight explosion and ensuing fire in a Brooklyn home left six people injured and dozens of area residents forced out of their homes in the middl...