Bringing life into frozen proteins to elucidate their molecular mechanisms

In the first half of the talk, Prof. Raunser will focus on membrane proteins and filamentous protein
complexes and present examples where interactions with small molecules have been fully
characterized at atomic resolution. In particular, he will present his team's structural work on the
canonical TRPC4 ion channel and its regulation by calmodulin and pharmacological agents as well as
the small molecule modulation of the Drosophila Slo channel. In addition, Prof. Raunser will highlight
several F-actin structures in complex with toxins and small molecules. In the second half, he will
concentrate on Tc toxins from insect-pathogenic bacteria. Tc toxins form a special protein complex
that stores a "killer enzyme" in a cocoon and injects it into the cell only after contact with the host via a
novel, syringe-like mechanism. There, the killer enzyme unfolds its toxic effect and leads to the
aggregation of the cytoskeleton and ultimately to cell death. The team have structurally and
functionally elucidated this mechanism which is of fundamental importance for the general
understanding of the transport of active substances through membranes and could even be used for
specific medical applications.

About Professor Stefan Raunser:
Stefan Raunser is a structural biologist whose research focuses on
understanding molecular mechanisms underlying cellular processes
in the healthy and diseased organism. He is Director of the
Department of Structural Biochemistry at the Max Planck institute of
Molecular Physiology, Adjunct Professor at Technical University
Dortmund and Honorary Professor at University of Duisburg-Essen.
With his research group, he uses a multidisciplinary approach,
including biochemical reconstitutions, high-resolution cryo-EM and
electron cryotomography (cryo-ET) primarily to investigate the
structure of macromolecular complexes that play a crucial role in cell
physiology, with a particular emphasis on toxin-mediated membrane permeation, the molecular details of muscle contraction and the dynamics of the eukaryotic
cytoskeleton. He has authored over 100 papers in the fields of structural and molecular biology and
has given over 200 lectures and seminars around the world. He is a scientific member of the Max
Planck Society and an elected member of the North Rhine Westphalian Academy of Sciences and Arts,
the German National Academy of Sciences Leopoldina and EMBO.

Bringing life into frozen proteins to elucidate their molecular mechanisms 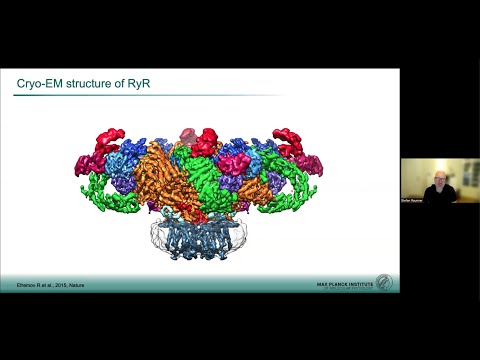 Presenter: Professor Stefan Raunser Department of Structural Biochemistry Max Planck Institute of Molecular Physiology In the first half of the talk, ...