admin
Jim Lebenthal joins the 'Halftime Report' with his analysis of Boeing's Q3 earnings report. Then, Steve Weiss weighs in on what it will take for company leadership to regain credibility. "I would go make money elsewhere, if I were you," Weiss tells Lebenthal. For access to live and exclusive video from CNBC subscribe to CNBC PRO: https://cnb.cx/2NGeIvi

Boeing on Wednesday said flaws in its 787 Dreamliners would generate $1 billion in abnormal costs and that it cut production to about two of the planes a month as it struggles to address quality issues. Those problems led it to suspend deliveries for most of the past year.

The manufacturer wrote down $183 million of that amount in the third quarter.

Sales improved, however, thanks to higher aircraft sales and deliveries. Boeing said its revenue rose to $15.28 billion in the third quarter, up 8% from $14.14 billion a year ago. That was below the $16.3 billion analysts forecast. The company reported a $132 million net loss for the quarter though it was narrower than the $466 million it lost a year earlier. On an adjusted basis, Boeing lost 60 cents per share, more than the 20 cents analysts expected.

“Our commercial market is showing improved signs of recovery with vaccine distribution and border protocols beginning to open,” CEO Dave Calhoun said in a staff note after results were released. “As demand returns, supply chain capacity and global trade will be key drivers of our industry and the global economy’s recovery.”

Boeing said worker availability in the supply chain “will be the critical watch item.”

Here’s how the company performed compared with analysts’ estimates complied by Refinitiv:

Adjusted results: A loss of 60 cents a share vs. an expected loss of 20 cents a share.
Revenue: $15.28 billion vs. $16.3 billion, expected.
Boeing first disclosed quality issues with seams on the fuselages of some of its 787s last year. The problems resulted in inspections that prompted Boeing to suspend deliveries of the planes to airline customers, depriving the company of cash.

Deliveries resumed briefly this year but were halted again in May for more inspections. Boeing has about 100 of the planes in inventory, analysts estimate. The company has repeatedly brought down the production rate for the jetliners. Over the summer, Boeing said it was producing fewer than five 787s a month.

“The company expects to continue at this rate until deliveries resume and then return to five per month over time,” it said in a release.

In an interview with CNBC’s “Squawk on the Street,” Calhoun declined to give an estimate on when 787 deliveries to customers, which include American Airlines and United Airlines, will resume, saying it partly depends on the Federal Aviation Administration.

“The FAA continues to engage with Boeing as the company works to demonstrate the reliability of its proposed method for inspecting certain undelivered 787 airplanes,” it said in a statement. “The FAA will not sign off on the inspections until our safety experts are satisfied.”

The wide-body 787s are used mostly for long, international trips. Demand for those flights was hurt by the Covid pandemic but United, American and other carriers have reported a spike in bookings for trans-Atlantic trips as governments ease pandemic travel restrictions. 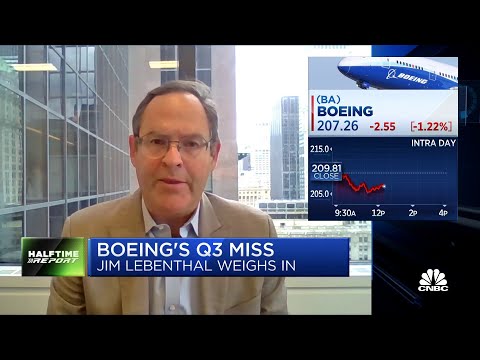 Jim Lebenthal joins the 'Halftime Report' with his analysis of Boeing's Q3 earnings report. Then, Steve Weiss weighs in on what it will take for compa...