Blake and Mouton - The Grid that Defines Leadership

admin
#BlakeandMouton #ManagerialGrid #LeadershipTheories
Blake and Mouton, two academics from the University of Texas came up with a two-dimensional #ManagerialGrid based on a manager’s concern for production (task-oriented) and concern for people (relationship-oriented).
Each axis on the grid consists of a nine-point scale with 1 meaning a low concern and 9 a high concern. Depending on a manager’s score on each of the two axis, we can assign different types of management styles to managers.
The managerial Grid prepared by them includes 5 distinct styles of leadership namely; #ImpoverishedManagement, #Country ClubManagement, #Authority-ComplianceManagement, #Middle-of-the-RoadManagement, and #TeamManagement .
These management styles of individuals may change in level and gravity along a grid.
#BlakeandMoutonManagerialGrid come in handy for an organisation with a large number of people in leadership positions, particularly for assessing their individual styles of management .The Grid therefore, could be useful in making a diligent assessment of a number of people as well as being used individually in order to determine own style.
Downside of the model could be the challenges involving in making a proper determination of a specific style. Possibility of making a biased assessment is high as well as making an incorrect determination. A typical leader may vary his /her management style and such a flexible approach may not get identified as such under #BlakeandMoutonManagerialGrid.

Blake and Mouton - The Grid that Defines Leadership 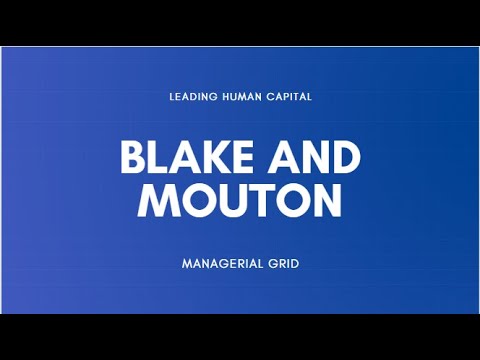 #BlakeandMouton #ManagerialGrid #LeadershipTheories Blake and Mouton, two academics from the University of Texas came up with a two-dimensional #Manag...