Art of the Opening Scene Pt. 2 — 6 More Ways to Begin a Movie, From Scorsese to Tarantino

admin
Opening scene breakdown with six more options for how to begin a movie.

The opening scene can make or break a movie. That makes knowing how to begin a movie extremely important for screenwriters. In the last episode of this mini-series on opening sequences, we covered six types of opening scenes. This time, we’re covering six more, including the dream sequence, red herring, flash forward, in medias res, flashback, and bookend.

The flashback scene is a great way to begin a movie. The best opening scenes that begin in the past isolate a formative moment for the protagonist or antagonist. These scenes highlight what motivates them or haunts them throughout their character development. Instead of starting in the past, flash forward scenes throw us into the future. This is a moment in the story, either from the middle or even the very end, that sparks the question: how will we get there?

Similar to the flash forward opening scene is in medias res. For in medias res movies, we also begin in what seems to be the middle of the story. Often, these opening scenes skip over what would have been the first act and inciting incident in a traditional story. Unlike the flash forward, though, in medias res openings do very little (or nothing at all) to fill in what we missed. They simply start in the middle and keep going from there. The dream sequence opening scene is fairly self-explanatory — but WHAT you decide to use them for varies greatly. Most of the time, the dream sequence opening scene is used to pinpoint some deep and active psychological concern for the protagonist. It shows us what they are working on internally, which may or may not have direct bearing on the plot thereafter.

The bookend is an example of how to open a movie with imagery, scenes, or ideas that also close out the film. This creates a “circular” narrative that either illuminates how much or how little a character has changed. Finally, the red herring opening scene is an excellent way to begin a movie. This is especially important when dealing with movies that employ a surprise ending. By immediately planting a false clue, the audience will be less likely to assume there is any sort of deception. That way, when the truth is finally revealed, they will be even more shocked.

How to begin a movie is perhaps one of the most difficult decisions. However, by knowing your options for opening sequences and how they work, you’ll be able to better choose the best first scene.

Art of the Opening Scene Pt. 2 — 6 More Ways to Begin a Movie, From Scorsese to Tarantino 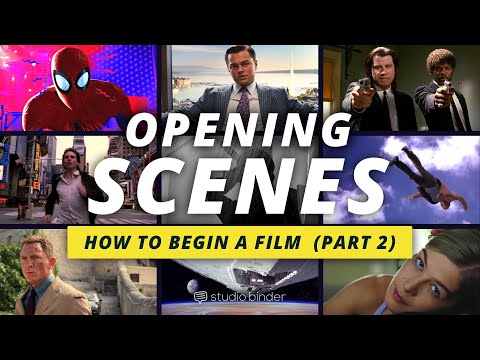