admin
Sealaska Heritage Institute (SHI) will sponsor a lecture on Tuesday on an attempt by tribes to disqualify Alaska Native corporations from receiving CARES Act funding as part of a series on Southeast Alaska Native history in honor of Native American Heritage Month.

The talk, ANCSA Corporations as “Indian tribes” Under Federal Indian Law and the Constitution, will be given by Chris E. McNeil, Jr., former president and CEO of Sealaska, a regional Native corporation established under the Alaska Native Claims Settlement Act (ANCSA).

The lecture is scheduled at noon Alaska time, Tuesday, Nov. 30. All lectures will be streamed at 12 pm to the Sealaska Heritage YouTube channel. A Q&A session will follow.

Chris E. McNeil, Jr., is the owner of Native Strategy Group, which provides advisory services to Native organizations. He is Eagle of the Dakl'aweidí (Killerwhale) House, and his Tlingit name is Shaakakóoni. He served as the president and CEO of Sealaska from 2001 until 2014. Originally from Juneau, McNeil served Sealaska in varying officer capacities from 1978 through 1993, including executive vice president and general counsel and as a member of the board of directors from 1998 through 2000.

Other positions McNeil has held include special counsel to the Alaska Federation of Natives; chairman of the Native American Rights Fund; the first director of American Indian Program at Stanford University; second vice president of the Central Council of the Tlingit and Haida Indian Tribes of Alaska; director of Goldbelt, Incorporated; director of the American Indian National Bank; president of the Juneau Tlingit & Haida Community Council; chairman of Tlingit & Haida Regional Housing Authority; Washington representative and counsel to the Mashantucket Pequot Tribal Nation of Connecticut; and chairman of the Native American Contractor’s Association.

McNeil earned a law degree from Stanford University, a master’s in political science from Yale University, and a BA in political science from Stanford University. He was also an inductee into the Stanford University Multicultural Alumni Hall of Fame and was awarded the Henry Roe Cloud medal from the Association of Native Americans at Yale, and the Alaska Federation of Natives Citizen of the Year. He is a member of the Tlingit and Haida Indian Tribes of Alaska and a citizen of the Nisga’a Nation. McNeil and his wife Mary, an enrolled member of the Winnebago Tribe of Nebraska, have two grown children and two grandchildren. 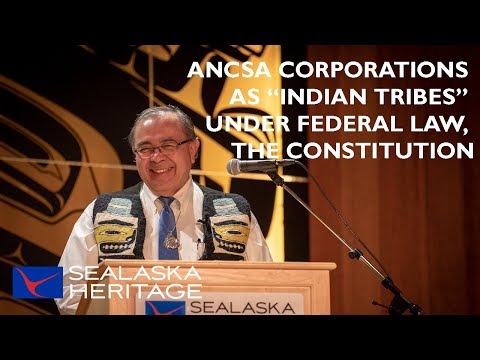 Sealaska Heritage Institute (SHI) will sponsor a lecture on Tuesday on an attempt by tribes to disqualify Alaska Native corporations from receiving CA...